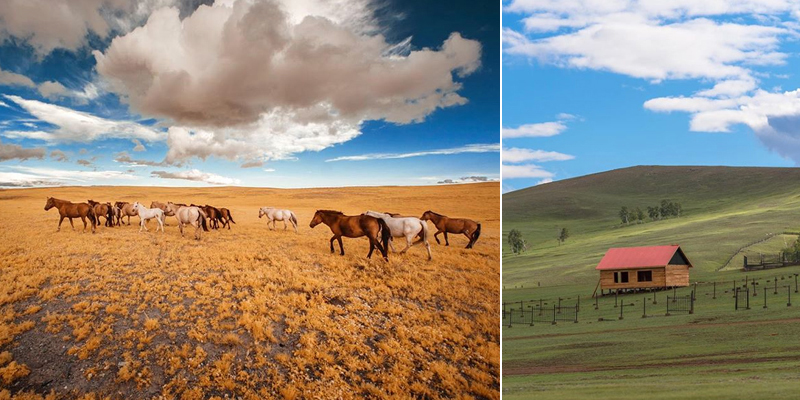 The Crown Prince of Dubai has escaped the UAE’s scorching heat on several occasions, but it’s his most recent vacation which has really dialled our wanderlust up a notch.

The royal journeyed to Mongolia earlier this week, according to his social media accounts, where the talented photographer really put his skills to good use.

The landlocked country, situated between China and Russia, is famously one of the world’s most sparsely populated nations, with only 1.9 people per square kilometre according to The Telegraph.

And Sheikh Hamdan captured that vastness of space perfectly in his travel snaps.

Teaming with nomadic communities, the country’s wild, rugged landscape attracts adventurous tourists (like the Crown Prince) keen to check out its flora and fauna.

However our favourite shot from Sheikh Hamdan’s trip is a nifty timelapse video, which showcased Mongolia’s crystal-clear skyline.

It’s easy to see from this why the nation – which is almost the same size as Alaska – is nicknamed the “Land of Blue Skies”.

While there are no direct flights from Dubai to Mongolia’s capital Ulaanbaatar, travellers can transfer via Beijing, Seoul or Hong Kong, to name just a few transit cities with routes between the two.

This marked the fourth trip Sheikj Hamdan has taken over the summer, after trekking through California’s iconic Yosemite National Park earlier this month.

The royal encountered wild bears and snakes as well as cute squirrels, as well as scaling the park’s mountainous terrain for this adrenaline-inducing photo.

The royal was also in Tuscany last month for the Al Maktoum Endurance Cup, an event inspired by HH Sheikh Mohammed bin Rashid Al Maktoum, where he visited the Leaning Tower of Pisa.

Sheikh Hamdan has also hiked and fished in Scotland, and rubbed shoulders with heir-to-the-British-throne Prince Charles at Royal Ascot over the weeks.

Where will the last few days of the summer take Fazza? We’ll keep you updated…