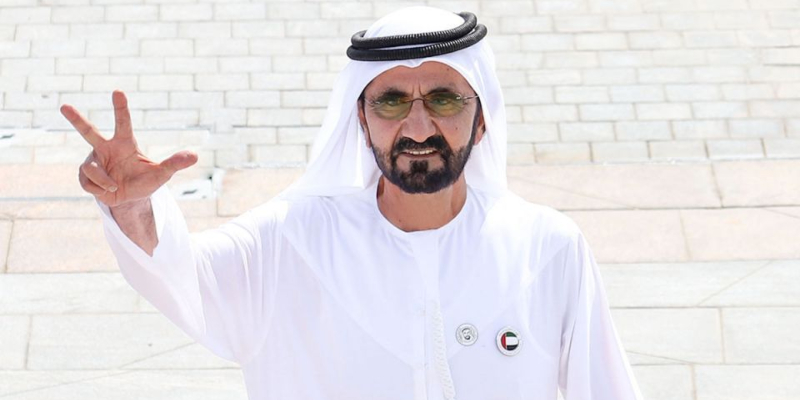 As countries around the world have weathered various challenges during the ongoing pandemic, UAE’s visionaries have managed to inspire its residents while empowering the workforce and easing tensions in the region.

While approaching the end of this year, we look back at some of the inspiring words from His Highness Sheikh Mohammed bin Rashid Al Maktoum, the Vice President and Prime Minister of the United Arab Emirates and Ruler of Dubai.

Following the outbreak of COVID-19, Sheikh Mohammed praised those on the frontline on the battle against the COVID-19 pandemic launching the #ThankYouHeroes campaign in March.

“Thank you, our first line of defense,” Sheikh Mohammed bin Rashid said on Twitter. “Thank you for your sacrifices and your watchfulness for the sake of the country.

“You are the protectors of the homeland today and its loyal soldiers. I invite everyone to thank them and appreciate for their continuous efforts.”

The ‘true power’ of a nation

At the beginning of April, His Highness shared the powerful and poignant message on about where “true power lies”.

The world has long been questioning where the true power lies. Does economy drive politics or the other way around? The coronavirus spread has shown that healthcare is the main power that shapes the economy and politics at a time when a disease brought nations to a standstill.

“The world has long been questioning where the true power lies,” he said. “Does economy drive politics or the other way around?

“The coronavirus spread has shown that healthcare is the main power that shapes the economy and politics at a time when a disease brought nations to a standstill.”

Those on the COVID-19 frontline will ‘go down in history’

In April, His Highness declared in a cabinet meeting that those on the frontlines of the COVID-19 battle that they will “go down in history”.

Sheikh Mohammed acknowledged how the nation was “racing against time to make our country ready for various circumstances”, but also highlighted and praised the efforts of those on the frontline of the COVID-19 battle.

Today, I chaired a cabinet meeting where we followed up on the latest developments and impact of the global COVID-19 on health, education and economic sectors of the UAE. We hosted frontline workers to thank them for their relentless efforts against the pandemic. pic.twitter.com/i0DzsCpv13

“Today you are setting the most wonderful examples of sacrifice and everyone will learn from you about the meanings of giving, humanity and responsibility,” he said. “We commend every second of the efforts and energies that you dedicate to the safety of citizens and residents, as well as your awareness of the dangers that you are facing every day to ensure our safety and the protection of our country.”

In May, to mark the 44th UAE Armed Forces’ Unification Day His Highness paid tribute to the protectors of the nation.

“Today, as we face unprecedented testing times – as is the entire world – the memory of the unification of our armed forces comes to strengthen our belief in our ability to move forward and in successfully overcoming this test,” he said.

Every year in the UAE, the 19th day of Ramadan is marked as Zayed Humanitarian Day, paying tribute to the nation’s founding father.

Sheikh Mohammed shared a video paying tribute to the late Sheikh Zayed, depicting what the late founding father of the UAE would have done in the pandemic.

What would have Zayed done today ? pic.twitter.com/cLnKFweMKz

Titled ‘What would have Zayed done today?’, the two-minute video showcased the UAE leaders chairing virtual meetings, visiting essential workers during these times and more. It also showcases the tireless work of those on the frontline amidst the battle against the coronavirus.

In the narration, it’s stated if Zayed were around today, “He would have eased the pain by being caring, reassuring, supportive. He would have been the leader who, when the world is pausing, he’s already preparing for what’s next.”

Upon the successful launch of the UAE’s Hope Probe, Sheikh Mohammed shared his pride about the project the nation has spearheaded.

“We proudly announce the successful launch of the Hope Probe,” he said. “The ground control station in Dubai has received the first signal from the probe after its solar panels were successfully deployed to charge its batteries.

“Our 493 million km journey to the Red Planet starts here.”

To mark the fifth annual Emirati Women’s Day on August 28, 2020, His Highness honoured women across the UAE.

Condolences for the Beirut explosion

“Our condolences to our beloved people in Lebanon… God have mercy on those who have moved to you… God be kind on Lebanese people.”

His Highness also ensured as much aid as possible was sent to Lebanon from the UAE to help those in need.

In celebration of this year’s Saudi National Day and to solidify the bond between the two countries, His Highness sent a heartfelt message to the “glorious” Kingdom of Saudi Arabia.

In a video which Sheikh Mohammed shared, the continued great relationship between the Kingdom and the UAE was showcased.

It was stated the country hopes and prays for “the continued prosperity and continued success” of Saudi Arabia.

‘The UAE is everyone’s country’

HH Sheikh Mohammed bin Rashid Al Maktoum, Vice-President and Prime Minister of the UAE and Ruler of Dubai, reaffirmed the that the United Arab Emirates is “everyone’s country”.

“The UAE is everyone’s country and we have tried to build a successful model – our doors and books will remain open to all,” he said on social media.

On the 75th anniversary of the United Nations, Sheikh Mohammed delivered a message on UAE’s tolerance, openness and coexistence saying, “We believe there is no future for anyone without cooperating with the other and that no nation can isolate itself from the rest of the world. The world learnt this lesson clearly in 2020 with the outbreak of the coronavirus pandemic.”