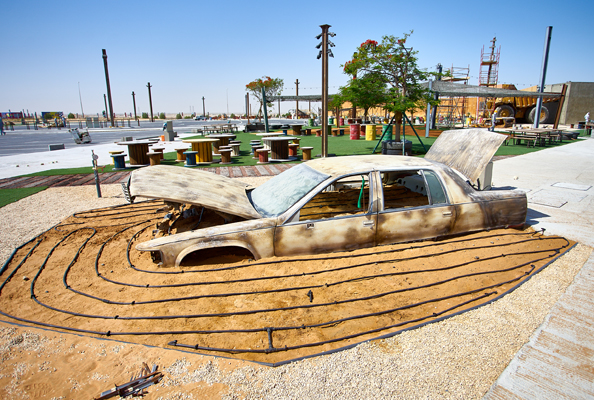 If you’re driving between Dubai and Abu Dhabi any time soon, don’t worry – you haven’t stumbled on the set of The Walking Dead or Mad Max.

The end-of-the-world-looking attraction on Sheikh Zayed Road is actually one of the UAE’s newest food truck parks.

Mad X is the fourth location of the Last Exit concept, and it’s sat right opposite the original Last Exit E11 branch, this time in the direction of Dubai to the capital. Read:
You Can Now Enjoy A Late-Night Dip At The Burj Khalifa…
The UAE’s Theme For 2018 Is All About HH Sheikh Zayed

The 500,000-square-foot attraction – which is more than three times the size of its counterpart over the road – will welcome diners from August 10, and will be open 24 hours a day, seven days a week.

Aside from a diverse range of food trucks, Mad X is decked out with war rigs, monster trucks and abandoned cars half-submerged in the ground, with most of the destination built using recycled materials.

And just because it resembles a post-apocalyptic wasteland doesn’t mean it’s not visitor-friendly, with grassy areas, picnic tables and shady netted canopies.

Among the vendors setting up shop are some favourites also found at Fifties-influenced Last Exit E11, such as Burger Pit, Poco Loco and Starbucks, as well as other burger joints Johnny Rockets and The Stuffed Burger. 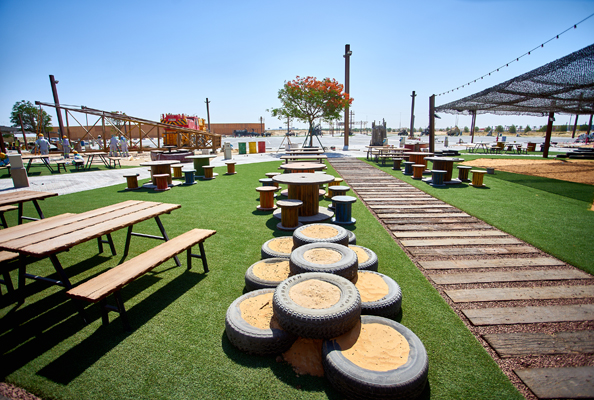 Read:
This Muslim Beauty Queen Made History After Refusing To Wear A Bikini On Stage
Sheikh Hamdan Encounters Bears And Snakes During His Intrepid US Trek

In the near future, Mad X is also planning to open an indoor dining area with “theatrical effects” (the sound of which makes us fear we’ll fling a bao up the air in surprise).

With branches also in Al Qudra and Al Khawaneej, Meeras plans to open a further six Last Exits over the next two years.