'We Need A New Renaissance': Queen Rania Is Honoured With Humanitarian Award

Queen Rania Al-Abdullah of Jordan is a woman who is not afraid to speak out for those in need of a voice.

And now the royal has been recognised for her efforts with an esteemed humanitarian award.

Queen Rania won the accolade – delivered by the Andrea Bocelli Foundation – due to her advocacy for refugees, children’s rights, and community empowerment.

Read:
OK, We Need To Talk About Queen Rania’s Outfits This Week
‘Empower A Woman And You Empower A Society’ – Queen Rania
Queen Rania Shows Us How To Dress During Ramadan
Queen Rania Shares Her Family Album
Queen Rania Encourages Tourists To Visit The Middle East

The royal accepted the award in Florence, Italy, on Sunday, where she stunned in a silky, two-toned Autumn/Winter gown by Atelier Versace. 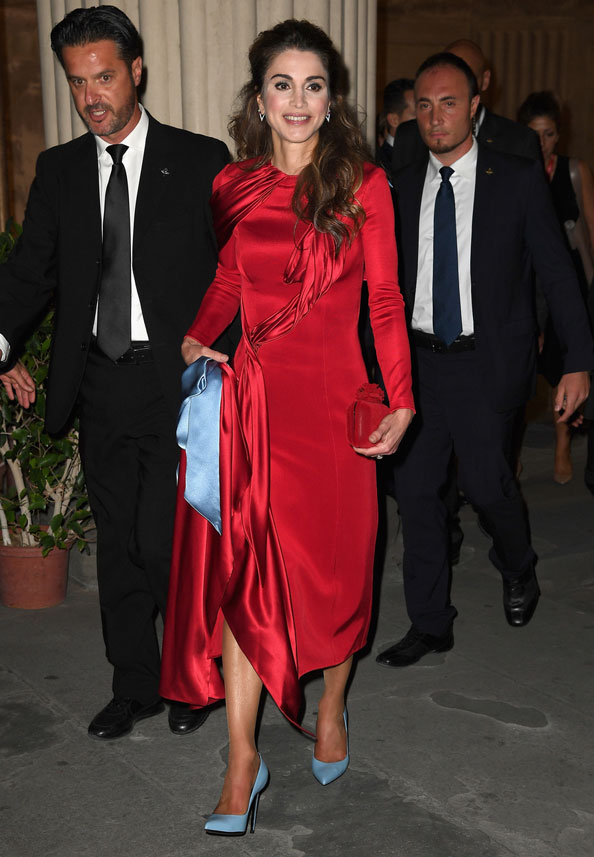 In her speech delivered on the night, Queen Rania acknowledged the measures that must be taken to “counter the ugliness of those forces that seek to wreak havoc on us”.

The royal called for a new Renaissance “that drives humanity to give its best just when the stakes are highest,” the Jordan News Agency reported.

“[Extremists] want us to live in a world of black and white, where the only colour is the red of bloodshed,” the queen said.

“They have declared war on all of civilisation but perhaps their most painful attack is that on the innocence of childhood. Like Omran Daqneesh.”

Referencing Daqneesh, the injured five-year-old Syrian boy whose image shocked the world last month after he was rescued from an air strike, Queen Rania questioned the legacy being left for future generations.

“He sat in the back of an ambulance, dusty, dazed, and shell-shocked. So deeply traumatised that not even the sight of his own blood fazed him. His silence screamed at the world. And the world had few words to offer back.”

The queen concluded her speech by urging the world’s citizens to “stand up for the downtrodden, and speak out for those whose voices are silenced”.

‘To act, not hesitate. To reach out, not retreat. To create and celebrate beauty – not only for its own sake but for the sake of humanity. For in celebrating beauty, we celebrate progress and perseverance.’