Want to dine like a royal? Then check out these Dubai restaurants 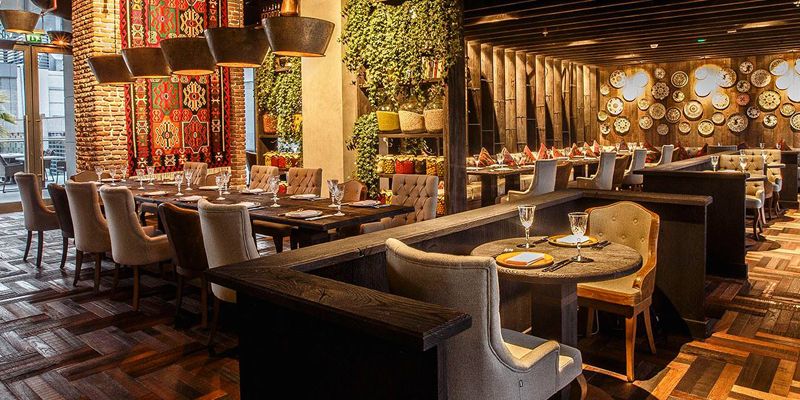 These places are all Sheikh Mohammed, Princess Haya or Sheikh Hamdan approved.

We’ve got thousands of restaurants here in Dubai, to the point that sometimes it can feel a little overwhelming knowing where to go.

But rather than spending hours poring over TripAdvisor reviews or Zomato ratings, why not follow in some rather regal footsteps?

Read:
Dubai designer behind Queen Rania’s look is ‘over the moon’
Can we talk about Crown Prince Hussein’s wardrobe for a minute?

We’re talking about local eateries that have won the seal of approval from members of Dubai’s royal family, who are often snapped enjoying a bite around the city.

Because is there anything cooler than saying you’ve dined at the same joint as a prince or princess?

So, with no further ado, here’s a selection of restaurants recently visited by the emirate’s royals…

HH Sheikh Hamdan bin Mohammed bin Rashid Al Maktoum popped into this Al Wasl favourite just last month, along with HH Sheikh Saeed Bin Maktoum Bin Juma Al Maktoum. While it’s not known what the Crown Prince tucked into, we can vouch for the Chicken Slaw, which comes with barbecue sauce and crispy onions. The restaurant is owned by Shaikha Eissa, a young Emirati woman who grew up in Dubai, and it does one seriously good-looking red velvet milk cake…

This City Walk eatery enjoyed a visit from HH Sheikh Mohammed, Vice President and Prime Minister of the UAE and Ruler of Dubai, and Princess Haya bint Al Hussein shortly after it opened last year. The cafe serves up Azerbaijani cuisine, such as lavangi and pilaf, and you can finish things off with some fresh baklava.

This Emirates Towers restaurant was inspired by the words of HH Sheikh Mohammed—so it seems only right that the royal dropped by last year, along with Sheikh Hamdan. Flow is a paleo, vegan, dairy- and gluten-free-friendly joint, entirely staffed by employees under 30, and is renowned for its healthy but tasty salads and desserts. It also brews up some really great coffee, which you can top up from the in-house ‘milk taps’, which let you choose from almond, rice, soya, cow’s and coconut milk.

The American favourite welcomed Sheikh Mohammed and family into its midst in 2016 for a low-key feast. While we’re not sure exactly what branch the ruler of Dubai, along with youngest son Zayed, visited, we do know they ate crinkle-cut fries. The Shackmeister burger is also always satisfying, as is the 50/50, a blend of lemonade and iced tea.

It’s only got 28 seats, and Sheikh Hamdan has sat in one of them. This tiny Japanese restaurant is located in Dubai Opera, offering small-scale but top-quality authentic dishes. It’s the city’s only restaurant serving fine-dining ‘Kaiseki’, so expect delicate plates using plenty of fresh seafood.

This Westin Mina Seyahi beach-side spot—visited by Sheikh Mohammed last year—is kitted out like a gorgeous Greek taverna, serving up some rather tasty and super-fresh plates. The highlights are obviously the seafood offerings, such as orange vinaigrette marinated octopus and pan-fried sea bass and sea bream.

The Crown Prince dropped by this Business Bay newbie just a few days ago. Located in the Steigenberger Hotel, Cuisinero Uno offers Mediterranean and Latin-influenced food, with dishes including paella, tacos and jalapeno sorbet. And the molten lava cake sounds like one not to miss…

This modern Indian restaurant, found in City Walk, has welcomed Sheikh Mohammed in recent times. The eatery serves up progressive takes on classic dishes, such as beef boti hash and dal chawal arancini, and the Nutella French toast makes the perfect ending to your meal.

This Syrian-Emirati spot in Souk Al Bahar is a favourite of Sheikh Mohammed. While it serves up plenty of traditional mezze-style dishes, it’s the slightly more adventurous options—like the warm date and kale salad and the grilled saffron lobster—that you really have to try.

Read:
You can get your hands on Meghan’s style right here in Dubai
George Clooney just revealed exactly how he first met Amal

It’s beloved in Paris, and its JBR branch has been visited by the ruler of Dubai in recent history. The French export does plenty of great savoury dishes, but you really want to come here to treat your sweet tooth. The signature macarons are always a winner, and the cakes and pastries are equally as delectable.