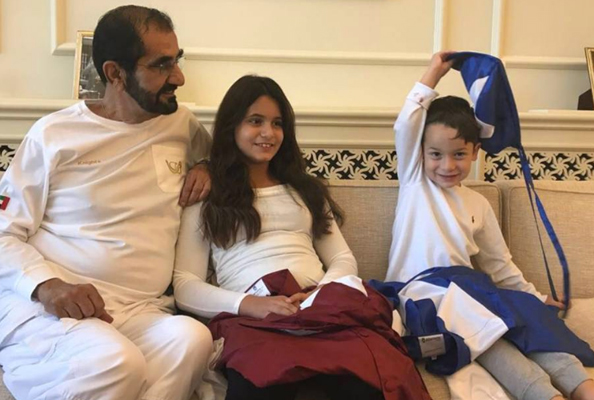 The ruler’s famous colours will take to the racetrack again… and this time, the next generation will be wearing it.

He’s a keen equestrian, who has just returned from supporting riders at his namesake Sheikh Mohammed Bin Rashid Endurance Festival in Italy.

And it looks like HH Sheikh Mohammed bin Rashid Al Maktoum is passing on his love of the sport to his children.

The Vice President of the UAE and Ruler of Dubai has gifted his two youngest – Sheikha Al Jalila and Sheikh Zayed – new racing outfits, and they have a rather touching history. 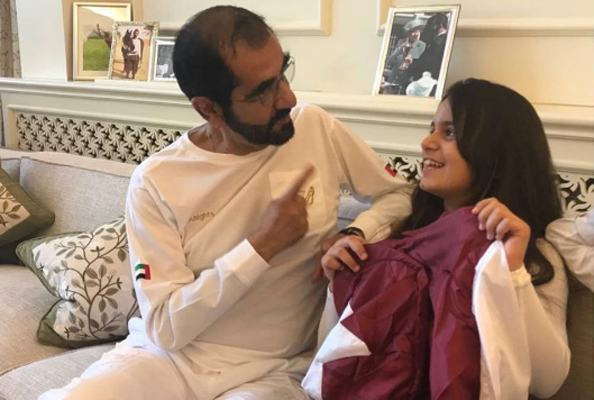 Read:
Sheikh Mohammed’s Family Celebrated His Birthday In The Most Adorable Way
From Dubai To Pisa: Sheikh Hamdan’s Take On The Classic Tourist Snap

The new pieces are crafted in maroon and white and blue and white silks, the very same colours that Sheikh Mohammed personally chose at the start of his racing career.

“A family of colours!” HRH Princess Haya bint Al Hussein captioned a snap of the 9-year-old and 5-year old receiving their gifts.

كانت لحظة مميزة لعائلتنا عندما قرر صاحب السمو الشيخ محمد بن راشد ان تعود القمصان الشهيرة ذات اللونين الماروني والأبيض واللونين الأزرق والأبيض الى حلبات السباق لتكون الألوان الخاصة بالجليلة وزايد ليتشاركوها مع إخوانهم واخواتهم وجميع شباب الامارات. هذه القمصان هي ذات الألوان التي استخدمها صاحب السمو في بداية مسيرته بمجال سباقات الخيول A family of colours! A wonderful moment for all of our family when His Highness Sheikh Mohammed decided that the famous Maroon and White silks, and the Blue and white silks that were his personal colors at the beginning of his racehorse owner would return to the racetracks for Jalila and Zayed to share with all their brothers and sisters, and the youth of the UAE!

Al Jalila and little Zayed, who both looked delighted with their new outfits, are already following in their father’s sporting footsteps.

The adventurous pair are frequently snapped on horseback, in images shared by their proud parents.

Princess Haya, who was the first female to represent Jordan in international equestrian sport, has previously spoken about helping her children learn to ride.

“I ride horses now mainly to jump onto my kids’ ponies to check them out before they get onto them, because you know when horses are fresh they are like people – they can get jumpy – so if I see they’re not ready for the children, I jump on – the kids find it funny,” she told Emirates Woman last year.

Read:
An Egyptian Actor Has Been Cast As Aladdin In Disney’s Live Action Film
This Model’s Outfit Has Sparked An Investigation In Saudi Arabia