Sheikh Mohammed: ‘Because Of Our People’s Generosity, The Future Is Bright’ 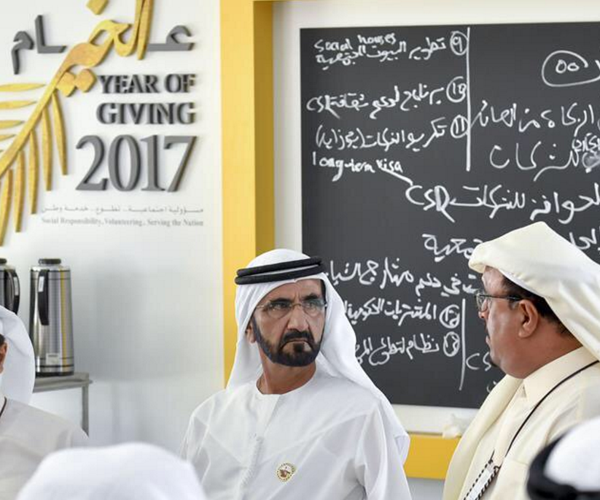 As you may or may not know, 2017 is the UAE’s Year of Giving, in an effort to continue the UAE founding father HH Sheikh Zayed’s philanthropic legacy.

So in a bid to work out what initiatives will be launched over the next 12 months, HH Sheikh Mohammed bin Rashid Al Maktoum, Vice President and Prime Minister of the UAE and Ruler of Dubai, hosted a brainstorming session.

Sheikh Mohammed attended the discussions, telling attendees that “consolidating the culture of giving in the UAE is a shared responsibility; all individuals and institutions will play a vital role”.

Today I attended the Giving Retreat; officials, stakeholders and experts gathered to build a sustainable framework for the #YearofGiving. pic.twitter.com/LlUdktDjub

“With the generosity of citizens, the Year of Giving, launched under the directives of President His Highness Shaikh Khalifa Bin Zayed Al Nahyan, will consolidate our position as a nation and people, especially as we are the most generous nation globally,” he said.

Ahead of the retreat, the royal had invited social media users to share their ideas and suggestions by tweeting them with the hashtag #YearofGiving.

And the people of the UAE delivered, with Sheikh Mohammed revealing thousands of responses were shared.

“The eagerness of the responses heartened and assured us that because of our generous people, the future of our country is bright; the people’s ideas will soon be a reality, and everyone will play a role in embedding the value of giving even further in Emirati culture,” he said.

So, what did they discuss? The future of philanthropy in the UAE.

Minister for Cabinet Affairs and the Future, Mohammed bin Abdullah Al Gergawi, kicked off the day by touching on the charitable acts by the leaders of each emirate, saying: “Our leaders have established charitable associations that are represented by officials from the public and private sector as well as humanitarian leaders and businessmen,” The National reports.

Al Gergawi said the retreat’s goal was to create a framework for humanitarian and charity work in the UAE.

One of the ways to boost the UAE’s philanthropic acts will be by boosting the number of volunteers.

Currently, the UAE has over 200,000 registered volunteers. However, the UAE government seeks to boost that number by creating a regulatory institution that can monitor the number of hours worked by each volunteer.

“Many young people want to volunteer, but are missing incentive programmes and clear guidance in order to be motivated to start volunteering,” Al Gergawi said.

On top of a framework for volunteers, Al Gergawi stated the importance of creating a regulatory framework for the UAE’s businessmen.

“The richest individuals in the region live in the UAE. While they already contribute to humanitarian work, clearer legislations are needed to outline and regulate their contributions.”

The public can join in on providing ideas for the Year of Giving through posting on social media with the #YearOfGiving hashtag.