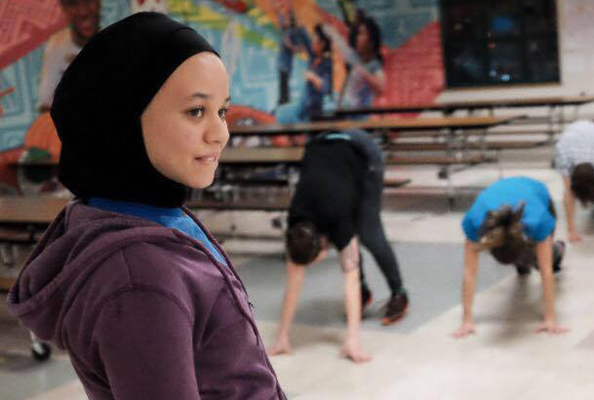 It was the most important battle of her life so far, and she won it without stepping foot in the ring.

A Muslim teenage boxer has scored the right to compete in her hijab after initially being barred from wearing traditional dress during matches.

Amaiya Zafar, a 16-year-old from Minnesota, took on USA Boxing’s rules after being prohibited from wearing her hijab, long sleeves and leggings in the ring.

Read:
A Saudi Teen Asked Her Dad What He Would Do If She Took Her Hijab Off
‘Swaggin’ My Hijabis’: Muslim Woman Responds To Haters With Epic Rap

Zafar’s experience made headlines around the world last year, after the high-school student was disqualified from a local competition due to her outfit.

She was told the modest additions under her uniform were “clearly a safety issue”,  and victory was instead automatically given to her opponent, Aliyah Charbonier.

However the title didn’t sit right with Charbonier, who decided to give the belt to Zafar instead.

“It’s not really a distraction for me what she’s wearing. She still had on gloves and headgear. I felt really bad for her. They didn’t give her a chance to fight,” Charbonier told the Washington Post.

But now, Zafar will have her chance in the ring.

Read:
Hijabs Can Now Be Banned At Work, A Top Court Has Ruled
This Image Of Adele With A Hijabi Fan Is Sweeping Across Social Media

After appealing to USA Boxing, the Council of American Islamic Relations announced last week that the teen will be exempt from clothing rules, and allowed to dress in accordance to her faith.

“This is a big step,” her coach Nathaniel Haile told The Star Tribune. “She’s put a lot of labour into this. She earned the right to showcase her skills, and I’m happy for her. But it’s just the first step in letting her achieve her dreams.”

Zafar, who hopes to compete at the Olympics in the future, has only won the right to wear her hijab at US competitions, not international.