No, These Aren’t The Kardashian Sisters… They’re Dubai-Based Beauty Bloggers 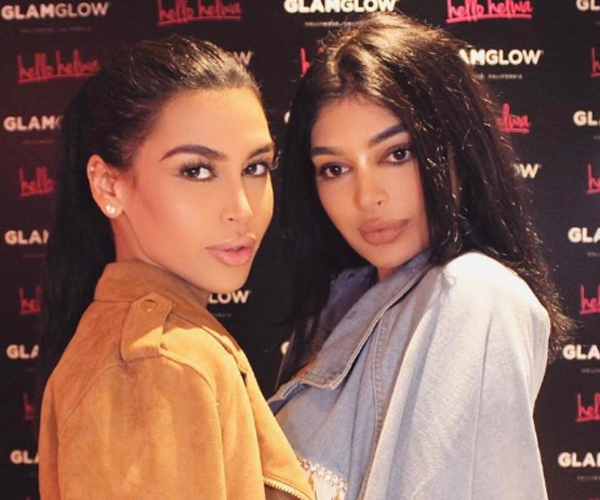 However their beauty game is just as on point as the reality TV stars’ – and they’re sharing all their best advice with Emirates Woman.

If you Google their names, search result after search result reads: “Meet Kim Kardashian’s new lookalike”, “These makeup artists might have body-snatched Kim”, and so on.

However Sonia and Fyza Ali just don’t get it.

“Our close friends and family are so used to seeing us they have never seen a resemblance,” the Dubai-based beauty bloggers tell us.

Been using Amazonian clay full coverage foundation for over 6 months in Dubai and not once has it broke me out 💕 It also contains SPF15 so perfect for the #Maldives weather 🌴☀️ follow our snap to experience our amazing time with @tartecosmetics : soniafyza 💜 #trippinwithtarte love you guys 😘 – S ✨

“It’s only when we are out together people constantly point it out – people that don’t know us at all! – especially in the States.”

The sisters, who were born and raised in the UK, are often mistaken for members of the reality TV family, even though they’re successful makeup artists and bloggers in their own right.

“We find it weird when people approach us saying so because we don’t even dress anything like them,” Sonia reveals.

Did this look for you guys on Snapchat, make sure you check it out before it expires. SC: Soniafyza. P.s all those asking about my accutane side effects one of mine is lip swelling 😫 #trippinwithtarte #soniaxfyza #Maldives

Read:
Beat The Summer Heat With Six Hair Defrizzers That Actually Work
9 Of The Best Spa Deals You Can Find In The UAE This Ramadan

The pair admit they’ve never watched a single episode of Keeping Up With The Kardashians, saying “we aren’t into reality TV”.

“We like how they have built an empire for themselves,” they add, revealing they have crossed paths with the famous family in the past, though the Kardashians “avoided eye contact”.

The sisters, who have a Turkish mother and Iraqi father, specialise in creating tutorials for Middle Eastern women, a skill which has amassed them an Instagram following of more than 500,000.

However Fyza, who also does makeup for several royals around the Middle East, says her favourite star to work with is MBC 1’s Style presenter Aline Watfa.

“She always lets me do what I want and that’s when the makeup turns out the best,” she says, adding that the celebrity she’d most like to work with is Rihanna.

The sisters, who are clearly queens of mastering the defined brow and super-fresh skin, say they take their beauty inspiration from the Arab world.

NEW BLOG POST (link in bio) on this “no makeup makeup look” that I filmed on snap a few days ago…but with DRUGSTORE alternatives. Everything mentioned is available the UAE. #soniaxfyza #makeup #beauty #tips

“All the beauty trends you see on the runway have been in the Middle East for generations,” they say, adding that they fell into blogging because they “both share a passion for beauty”.

“We decided to help women around the world while we were learning ourselves at the same time,” says Sonia.

“We just want to spread positive energy to women across the world through our love for what we do.”

What do guys think of these lashes? 💋✨

Read:
The Five Top Foundations For Arab Skin Tones (According To The Experts)
Bookmark This: Here Are Dubai’s Best Salons & Hair Stylists

And help they are giving, with their beauty tips often offered for Arab-specific scenarios.

For example, their best advice for keeping skin healthy during Ramadan? Use hydrating face masks plentifully and often.

“We can’t drink water during the day so it makes our faces look drained and tired,” the sisters say. “Face masks that have brightening and hydrating ingredients are a must! It makes makeup application so much smoother and long lasting.”

It’s already the 2nd of December in the UAE! Happy national day to the best country in the world! We are so proud of all you have achieved. Never have we come across anywhere that’s so accepting of everyone’s faith and culture. You have made it so safe and protected for women, we have never felt so comfortable elsewhere. Our second home, God bless the United Arab Emirates! THANK YOU💚❤️💚❤️💚 #soniaxfyza #UAE #اليوم_الوطني

In fact, a solid skincare regime is a must for those living in warm climes, Sonia and Fyza urge.

“We noticed it doesn’t matter how many great makeup brands you use during this heat, it all depends on how well you take care of your skin,” they say.

“Try not to go overboard with the moisturiser, and leave 30 seconds in between primer and moisturiser. This gives both enough time to set and you have longer-lasting makeup.”

When it comes to their own can’t-live-without products, Sonia reveals she relies on eyelash curlers, MAC Zoom Lash mascara, and Charlotte Tilbury’s Lip Cheat in Pillow Talk (which, additionally, we are also huge fans of).

“It’s the best invention ever,” she swears.

Despite their love of products, the sisters have one tip they want to tell all women: “Less is more.”

“Embrace your natural beauty and try not to go overboard with foundation,” they say. “Use a BB cream to even your skintone and add concealer where needed.”

And if that’ll give us a complexion as glowing as this, we’ll be heeding their advice this summer…

Changed up my skin care routine. I will have a blog post plus snapchats about what I’m using. Snapchat: soniafyza – F #soniaxfyza #Uae #nomakeup