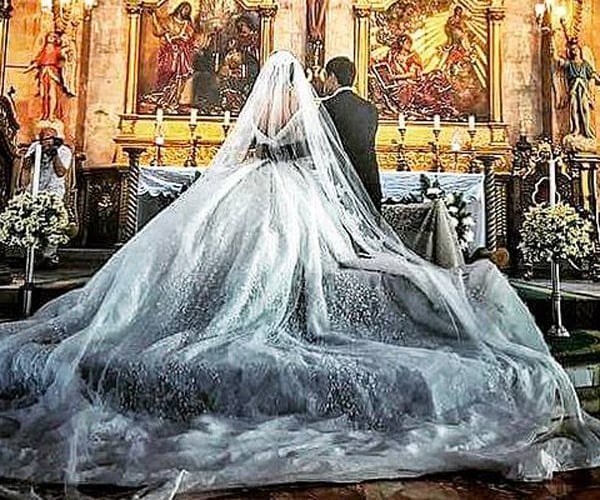 The Dubai-based designer dressed the bride in a couture creation.

As a designer beloved by Hollywood and royals alike, Michael Cinco isn’t short of clients vying to snap up one of his custom creations.

However his most recent customer was more touching than most.

The Dubai-based couturier dressed his niece in a stunning gown for her wedding day, the designer revealed on Instagram over the weekend.

Read:
This Zuhair Murad wedding dress is what bridal dreams are made of
This Lebanese designer created a wedding gown fit for a brand-new royal

Cinco, who has worked with Jennifer Lopez, Lady Gaga and Aishwarya Rai (to name just a few), came up with a crystallised fairytale creation for his family member’s nuptials.

Only one shot was shared of the ceremony, which took place in Manila, but it’s enough to see why this is going on our bridal Pinterest board:

Now that’s a train to end all trains, right?

We’ve contacted Cinco to find out more about the enchanting gown, but in the meantime, we’re just marvelling.

The designer, who’s originally from the Philippines, has in fact dressed several brides from his home country of late, as his social media accounts prove.

This off-shoulder number, layered with delicate lace and beading, looks rather Grace Kelly-esque, while the embellished veil of this look sends it into Disney Princess levels:

The couture designer is also a go-to for celebrities for red-carpet events, and has dressed Mariah Carey, Jennifer Lopez, and 2016 Miss Universe winner Pia Wurtzbach, to name a few.

Read:
This Lebanese Man Just Popped The Question At 36,000 Feet…
The Work That Went Into Creating This Qatari Princess’ Wedding Dress Is Next Level

So for now, we’ll just be dreaming about wearing one…