It’s no secret that His Highness Sheikh Hamdan bin Mohammed bin Rashid Al Maktoum, the Crown Prince of Dubai is a huge foodie.

He’s regularly seen out and about in Dubai supporting the F&B industry visiting numerous hotspots. DIFC restaurant Gaia is known to be one of his ultimate favourites.

Just recently throughout the month of December (and the beginning of January), His Highness was doing a somewhat foodie tour of Dubai having been photographed at four restaurants in the matter of just a couple of weeks.

Sal at the Burj Al Arab

In mid-December, the Crown Prince of Dubai was pictured at Sal at the Burj Al Arab. This restaurant opened its doors back in September 2020 and has been a popular destination for restaurant-goers ever since.

It offers guests endless ocean views with seamless service and a sophisticated menu.

Described as “barefoot luxury meets Southern European culinary excellence”, the restaurants also comes fully equipped with a 100-metre infinity pool to relax at after a delightful meal. From flavourful dishes prepared by Chef Roberto Rispoli, this amazing eatery is a part of the Jumeriah group.

READ: 6 Dubai restaurants which have Sheikh Mohammed’s stamp of approval 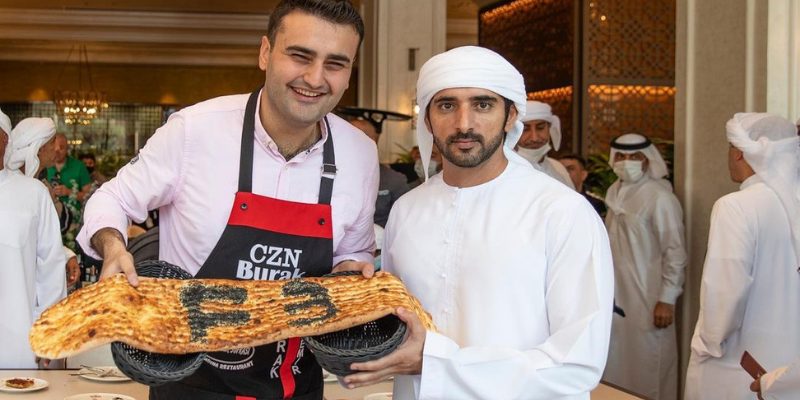 Around one week later, on Christmas Day, His Highness was then seen at brand new restaurant CZN Burak located at Boulevard Point in Downtown Dubai.

The new Turkish-Middle Eastern restaurant is the first Dubai-based establishment for Chef CZN Burak – who is hugely popular on social media with over 17 million followers – who already has three popular restaurants in Turkey, where he is from, and he has now decided to crack the Dubai F&B space.

Sheikh Hamdan was treated to an array of dishes on his visit to the restaurant’s opening day, all of which were personally cooked and prepared by Chef CZN Burak himself.

The following day, on December 26, Sheikh Hamdan was then spotted at one of his favourite restaurants – Avli by tashas. Located in DIFC, the Crown Prince of Dubai has been spotted at the stunning spot on more than a few occasions.

Natasha Sideris is the brains behind these well-known café concepts in the emirate, offering stunning treasures from all around the world in her famous eateries. Passion and culinary creativity are evident throughout, guests can experience a world of flavours on the menu.

Rounding off his foodie tour of Dubai, Sheikh Hamdan was seen dining at one of our absolute favourite hotspots, The MAINE Land Brasserie, on New Year’s Day. We couldn’t think of a better place to start off the year than this gem located at the ME Hotel in Business Bay.

With the vast success Ghazal has had, he’s set to open his first international brand for the MAINE Group in London later this year.

“We are quite advanced in our plans to open The MAINE in London, but obviously it all depends now on COVID-19,” Ghazal previously told EW. “We are actively considering the Far East and Saudi as well. We should have a clearer picture towards the end of the year, hopefully, by then we will be able to look back at this year with humility for what it has taught us.”

As a regular visitor to London, we wonder if Sheikh Hamdan will pop into the new MAINE branch when it opens (pandemic permitting).