Students from respected Paris university Sciences Po sparked controversy after creating a ‘Hijab Day’ Facebook page and inviting other students from the university to wear a hijab for a day.

The idea behind Hijab Day was to allow people to experience the stigmatisation that veiled women in France go through each day. Since 2011, the French parliament has passed several laws on when and where women can wear headscarves.

Students Lilly Mullot, Laetitia Demaya, Anais Khaldi, who are the admins of the Facebook page didn’t want to cause trouble, they just wanted to convey that “all women should have the right to dress however they want and be respected in their choices.”

They continued: “It is about showing our support to the idea that we [women] are in charge and in control of our bodies. We dress however we want, and do not accept to be told otherwise. Veiled or not, all equal… If you are a humanist, feminist, anti-racist, anti-paternalist or whatever, come join us.”

Read: The First Muslim Hijabi Ballerina In The World 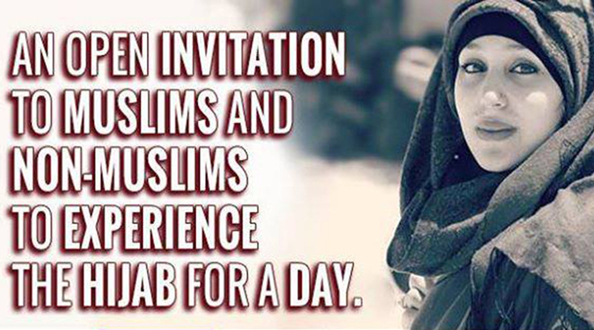 A picture used to promote the Paris Hijab Day event

Current Prime Minister Manuel Valls, agreeing with former president Nicolas Sarkozy, recently revealed in an interview that headscarves should be banned from higher education and stated that the headscarf was a challenge to France’s secular society.

The Hijab Day Facebook page lashed out at Valls, who also he said earlier this month that the veil was being used as a political symbol for the “enslavement of women.” This comes just after the Minister for women’s rights compared women in veils to people “who accepted slavery.”

Supporting Hijab Day, a feminist group from Sciences Po, Politique’elles, said: “Whatever they wear, whether a miniskirt or a veil, [women] are criticised. Feminism must remain universal to defend all women, independent of their religion, origin or social class.”

Since the recent terrorist attacks at the Bataclan Theatre in Paris and in the region, France has struggled with rising Islamophobia, the event organised by the Facebook group was an attempt to shut down stereotypes.

Unfortunately, however, the right-wing National Front said that the Hijab Day initiative was “nauseating”, and that the whole movement was just a bunch of “Parisian middle class disconnected from social reality”.

Users on the National Front Facebook page said that Hijab Day was a “danger to their democracy” and that universities such as Sciences Po should be an example of democracy and secularism.

While Hijab Day was a step forward, it seems there are still many steps to go…