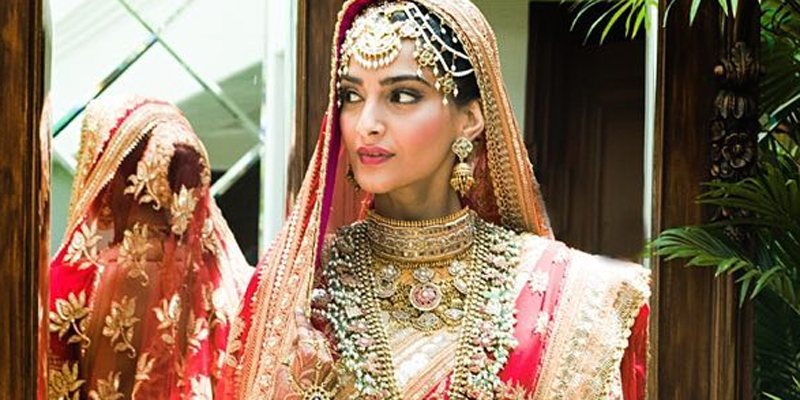 The Bollywood icon looks resplendent in vibrant red for her big day.

It was only confirmed earlier this week, but Sonam Kapoor’s big day is already upon us.

The Bollywood star exchanged vows with her beau, entrepreneur Anand Ahuja, today – and we’ve just been given our first peek at her glorious wedding ensemble.

Read:
In pictures: Sonam Kapoor’s mehendi ceremony
Amal Clooney absolutely smashed it out of the park at the Met Gala

The 32-year-old bride donned traditional red and gold for the nuptials, according to an image shared by stylist and Vogue India fashion director Anaita Adajania.

The two shots, showing Kapoor in a bridal lehenga, were shared on Instagram with the date of May 8.

The Veere Di Wedding actress tied the knot with her partner of two years at a private bungalow in Mumbai, Gulf News reports, with stars including Amitabh Bachchan and Kareena Kapoor Khan in attendance.

Kapoor’s lehenga, which she teamed with a chooda and matha patti, was designed by Anuradha Vakil, who was also behind the actress’ mehendi outfit earlier this week.

The couple only revealed a few days ago that they were set to wed, releasing a confirmation to the Hindustan Times.

“The Kapoor and Ahuja families take great joy and pride, in announcing the marriage of Sonam and Anand,” the statement reads.

“Since it is an intimate affair, we request you to respect the family’s need for privacy. Thank you for all your blessings and love as we celebrate this special moment in our lives.”

Read:
In pictures: Our favourite looks from last night’s Met Gala
It’s true: Sonam Kapoor is getting married this week

The pair met more than two years ago through a mutual friend, and have kept their relationship largely from the public eye.

The newlyweds will not, however, be enjoying a honeymoon straight after their nuptials, with Kapoor set to attend the Cannes Film Festival in France in the next few days.

We’ll be bringing you more from her first post-wedding red carpet appearance when we have it, but in the meantime, mabrouk to the happy couple!