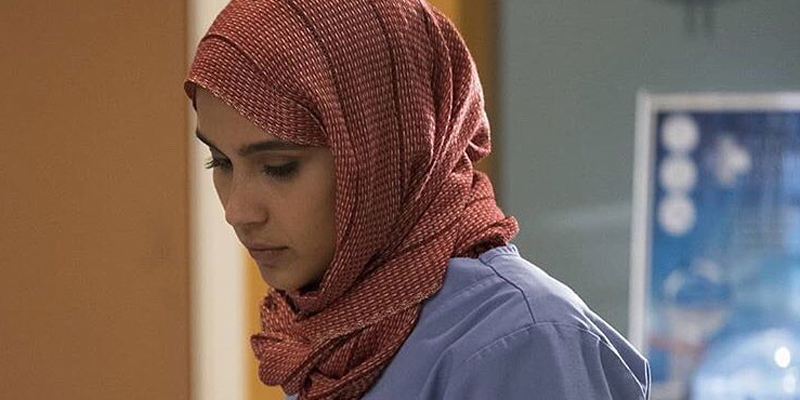 “My faith is about service and compassion.”

Long-running US television show Grey’s Anatomy has a history of big, pay-attention moments, and they’ve just had another.

The latest episode of the Shonda Rhimes-led show featured a hijabi doctor removing her headscarf  to stop a young boy from bleeding out.

Anyone else getting a bit of a ripped-from-the-headlines vibe? The plot point isn’t a million miles from the real story of Jahawer Saif Al Kumaiti, the young Emirati woman who saved a man’s life with her friend’s abaya.

Read:
Namshi has tapped one of our favourite hijabi models for a new campaign
You need to watch these 4 shows featuring women from the region

On Grey’s Anatomy, intern Dahlia Qadri is moving an unconscious patient with a piece of metal stuck in his leg. The boy wakes and pulls the metal from his thigh, leading to a huge arterial bleed.

Qadri, played by Sophia Taylor Ali, acts quickly and uses her hijab to put pressure on his wound.

You can watch the scene here (though, if you don’t like the sight of bloody, maybe don’t).

Qadri’s superior tells her she’s done well, but our favourite moment came later in the episode when the young doctor explains her actions.

“It’s a symbol of my faith. And my faith is about service and compassion,” Qadri says.

Yep. That just happened. And so, did THAT. #GreysAnatomy #TGIT

Sure, it’s fiction, but representation matters. Muslim-American filmmaker Iman Zawahry said as much in a Facebook post that’s since been shared over 8,000 times.

“Two years ago… I couldn’t find one good example of positive portrayal of Muslims in television and definitely not a hijabi on camera,” Zawahry wrote.

“Something I’ve been working toward as a Muslim female filmmaker for years. This minor, simple line and character shows humanism, understanding and unity in our community.”

Ali posted about the moment on Instagram, saying it was a “really cool episode about service and compassion.”

I whip this thing off in last nights episode. So crazy things are happening on Greys Anatomy. Crazy things. Really cool episode about service and compassion. Here’s a shot where I think I’m mid blink to commemorate.

We’re here for it. Here’s to more hijabi visibility in pop culture and the rest of the world.