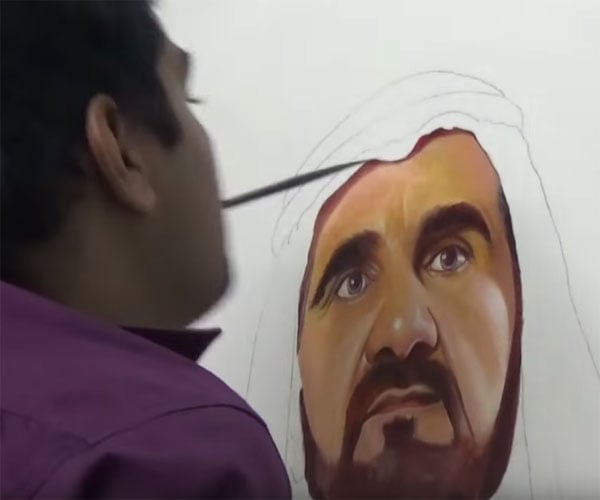 His unique talent is seriously inspirational…

HH Sheikh Mohammed bin Rashid Al Maktoum has had his portrait painted hundreds – maybe even thousands – of times, by some of the world’s top artists. But the vice president and prime minister of the UAE and ruler of Dubai has possibly never had his likeness recreated quite like this.

Indian artist Jesfer Pulikkathody has suffered from muscular dystrophy for several years, leaving almost his entire body paralyzed from the neck down.

But he doesn’t let that get in the way of his passion – over the years he has learned to write and paint using his mouth. He has painted the likes of Mother Theresa and Mahatma Gandhi, and now Sheikh Mohammed and Sheikh Hamdan have been honoured with one of Pulikkathody’s special portraits.

A video shared to YouTube shows the incredible amount of work that went into creating the masterpiece – a four-month-long effort, in fact.

Though he has never visited the UAE, Pulikkathody said the portrait was “dedicated to the two venerable personalities who influenced me and continue to inspire me.”

Earlier this year, Sheikh Mohammed said he would like people with disabilities to be referred to as “people of determination”.

“Disability is in fact the inability to make progress and achievements,” the royal said.

“The achievements that people of determination have made in various spheres over the past years are proof that determination and strong will can do the impossible and encourage people to counter challenges and difficult circumstances while firmly achieving their goals.”

Dubai has committed to becoming one of the most disabled-friendly cities in the world by 2020.