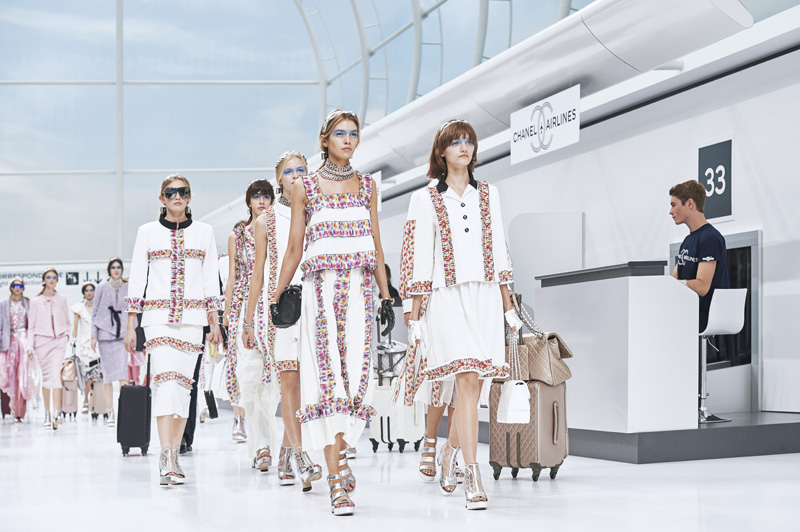 Pass us the coffee, ditch the heels and don’t even think about asking us to wear anything other than a cashmere tracksuit as the fashion marathon is finally over and we are boarding a flight back to reality.

Four weeks of style offered us an emotional Givenchy showstopper on September 11, a Burberry backpack that we can’t get over, the queens of the selfie game at Dolce & Gabbana and lastly but at no means least,  a memorable week of bridal-esque dresses, rainbow delights and the opening of the Chanel airport in Paris. Find the seven best happenings at Paris Fashion week 2016 below…

Maybe it’s just us – we’re currently working on the next Emirates Bride issue – or does everyone agree that designers at PFW have gone bridal-mad on the runway?

Alexander Wang made his Balenciaga swan song with a virginal parade of white, delicate and feminine creations, however, perhaps not the best walking-down-the-aisle song of choice, “Nuthin But a G Thang” by Dr. Dre. 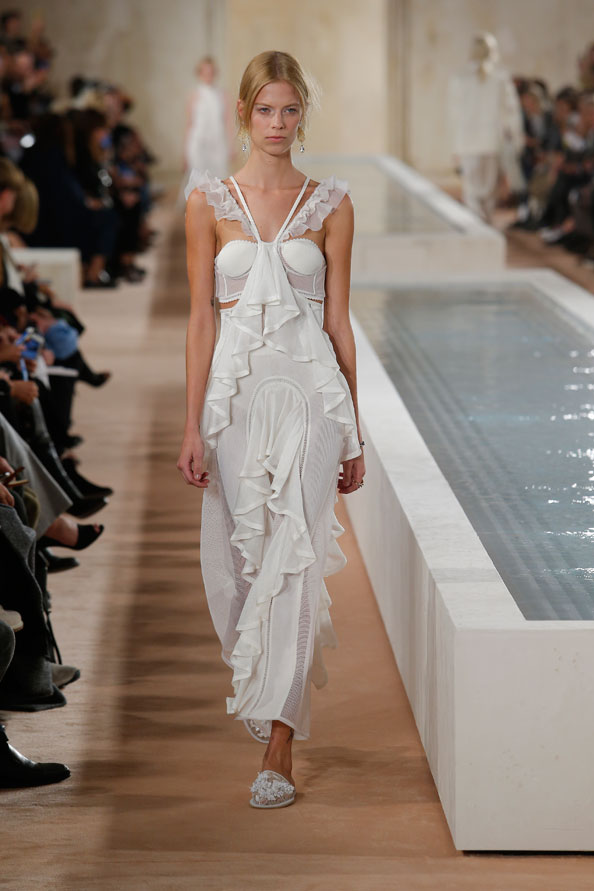 Sarah Burton at Alexander McQueen created Victoriana white ruffles, while Valentino fashioned a tribal bride, with feather necklines and sheer embroidered tulle quite similar to the brazen bride at Alberta Ferretti who wore delicately transparent silk, lace and not much else. 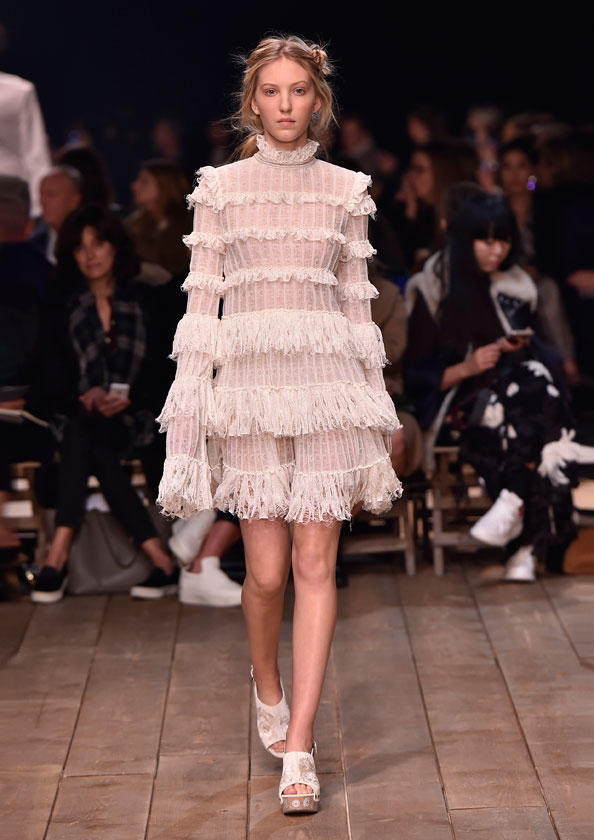 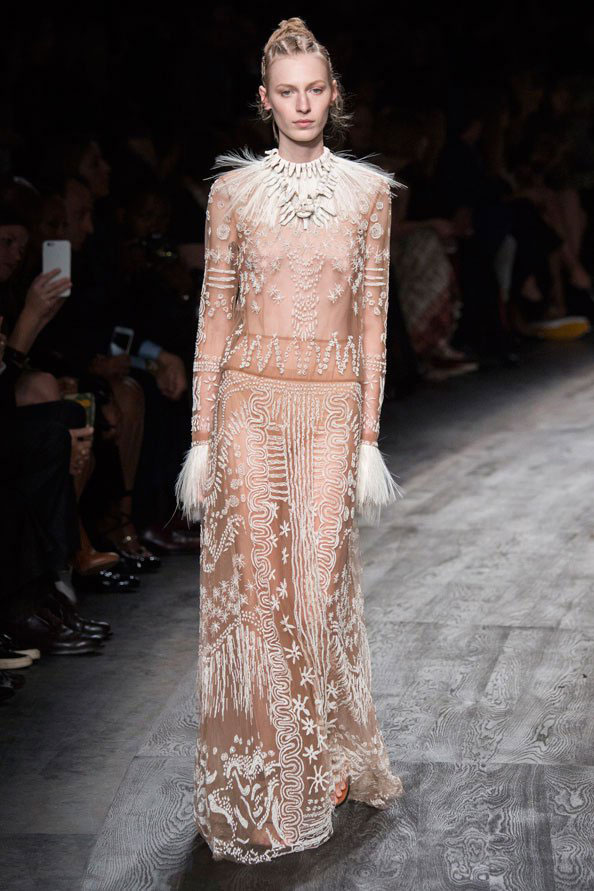 Valentino girls walked to the beat of the tribal drum 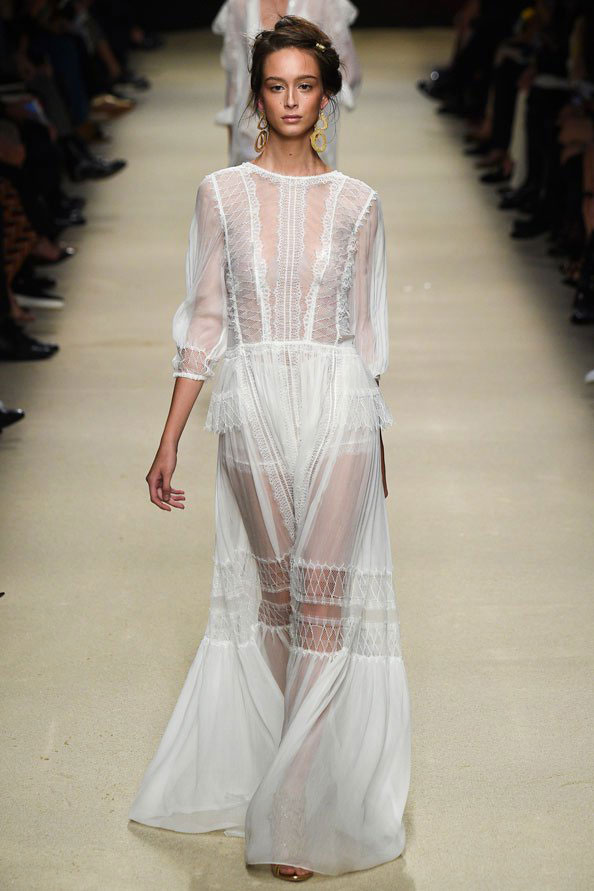 Sheer does it at Alberta Ferretti 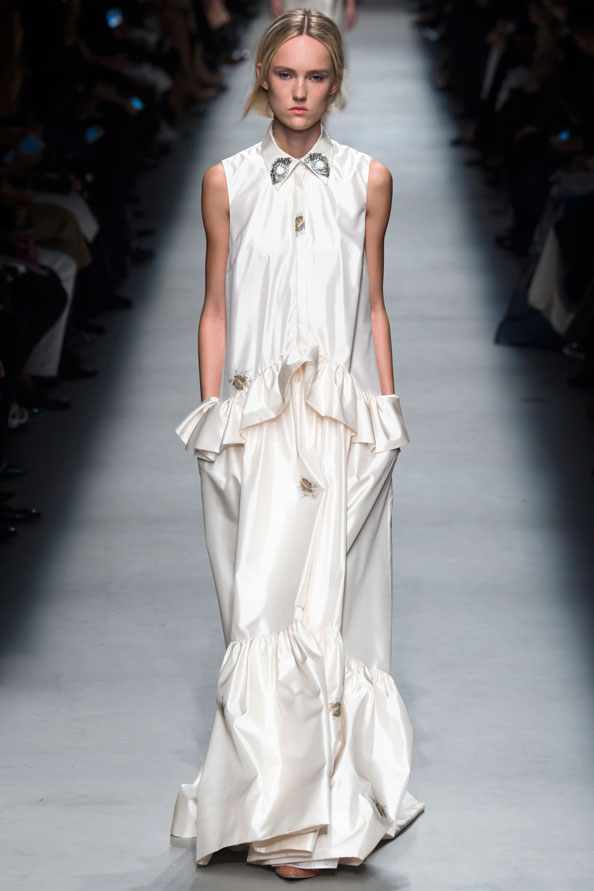 Slip on those ruby red shoes and take a walk down the yellow brick road as fashion is headed for the Emerald City. Following in the footsteps of the Christopher Kane’s glittery green lamé pleated skirt and jumper from autumn/winter 2015 (see team EW’s Jade wearing the look at NYFW), Vetements recreated the lamé but in a loose-fit silhouette with ruffles and pussy bows. 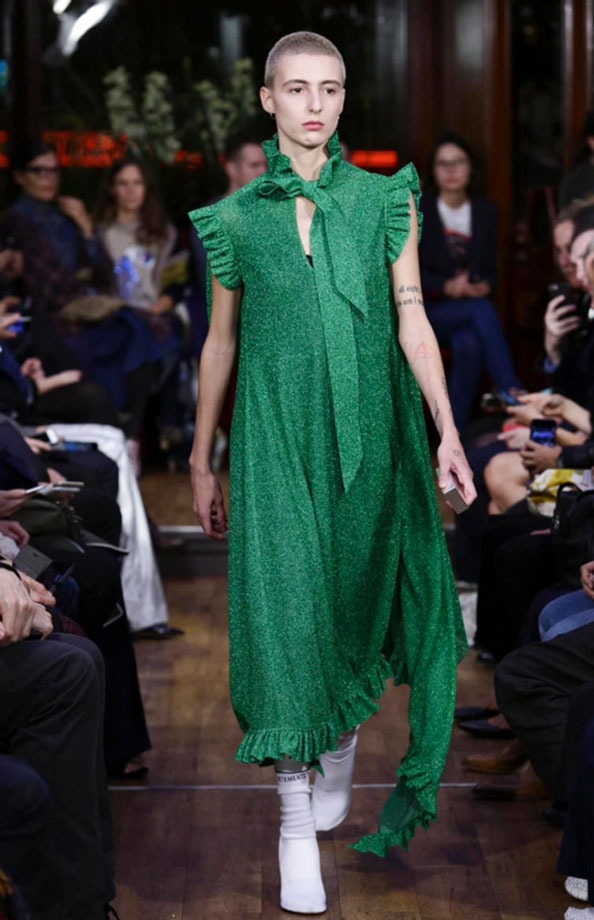 Man of the moment, Olivier Rousteing also treated us to a flamboyant mix of Flamenco skirts, figure-hugging suede and crystal adorned crochet all in the same hot hue. 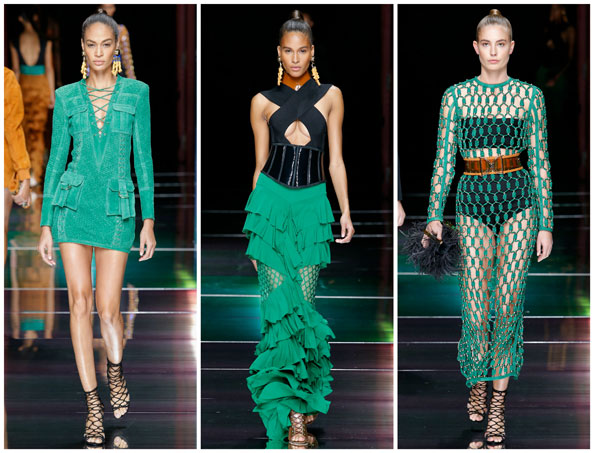 The Balmain army has us green with envy, nothing’s changed there

Taking the term runway quite literally, Karl Lagerfeld for Chanel has moved on from supermarche’s and casinos to something a little more jet set – ahem, an airport terminal. Boarding of Gate No.5 began with  model Edie Campbell donning a tweed pantsuit (as expected) and the latest luggage trolley the ‘Coco Case’. 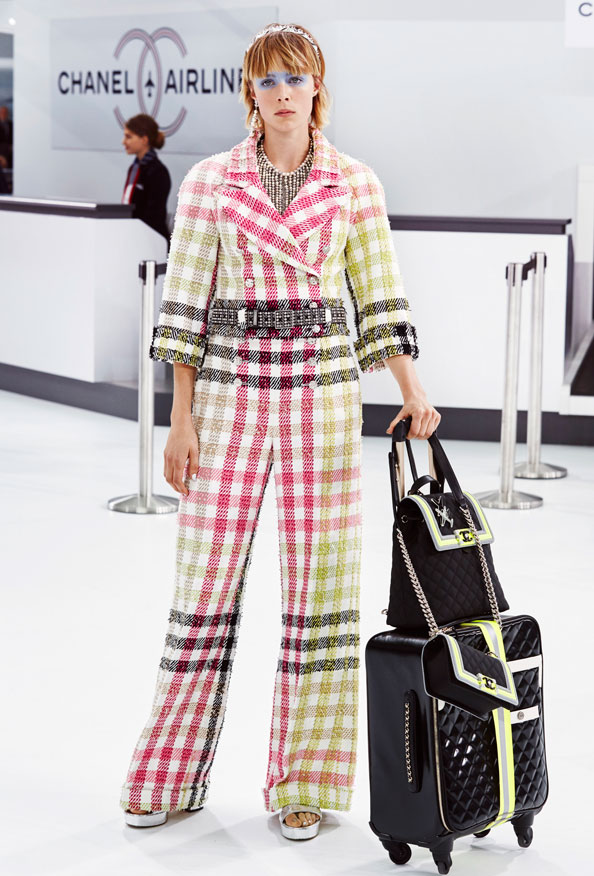 Cara Delevingne embraced her role as check-in staff and passengers including Vanessa Paradis, Lily-Rose Depp and EW cover star, Razane Jammal watched on from the Chanel lounge in in Terminal 2C. 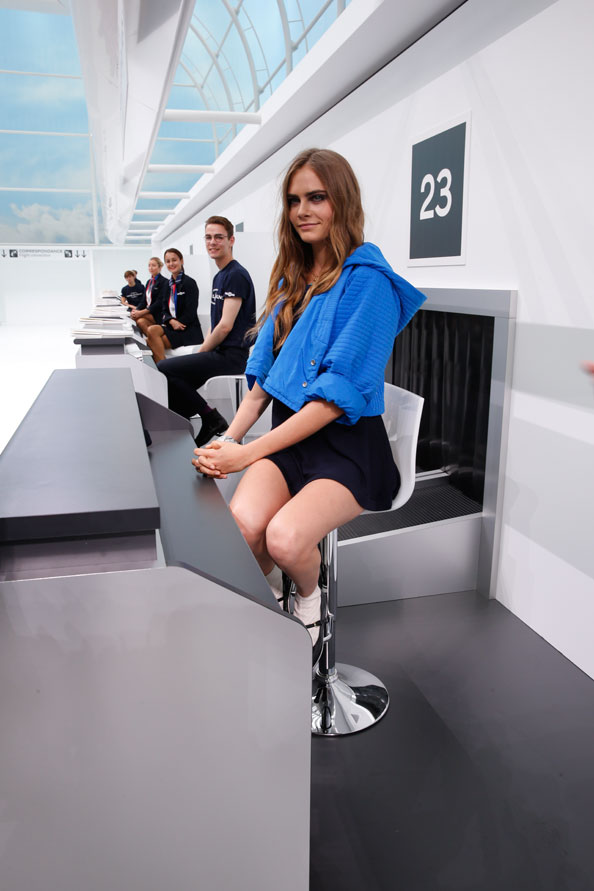 Chloé and The Amazing Technicolour dresses got fashion-goers in high spirits as models floated down the runway in a ethereal multi-coloured chiffon – dreamy. 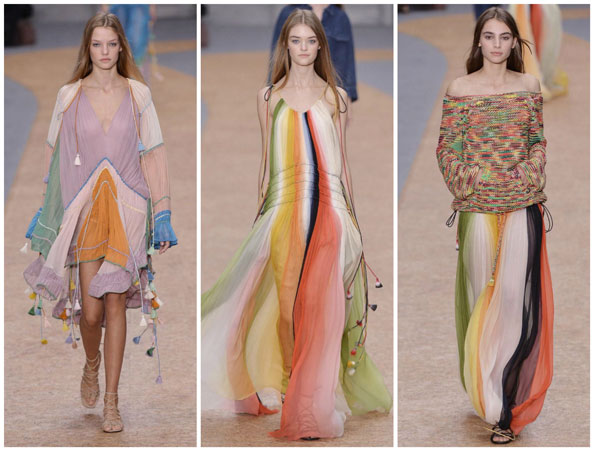 Rick Owens made an exhibition of his collection by recruiting a cast of Parisian dancers to perform on the catwalk rather than simply walk it. Cyclops Women. a nickname coined by the Rick Owens team, was basically dancers strapped on to each other. What are you thoughts on the spectacle? We are still undecided. 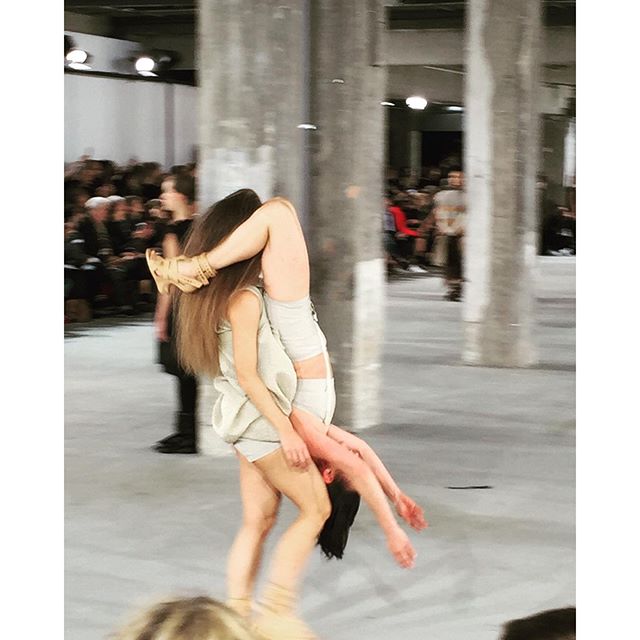 Was it an fashion show or an art exhibition? Image: @rickowensstorenewyork via Instagram

The Nicolas Ghesquiere space ship landed back in Paris for another rendezvous and what was named “his best collection yet” by the editors over at Vogue. His ‘space cadets’ wore metallic and orange leather bombers, sequin gown, zip detailed dresses, biker jackets along with boiler suits and sporty mesh fabrics. Nip In The Bud

Set in the usual historic grounds of  Louvre’s Cour Carrée Raf Simons only went and created a ‘meadow-like mound’ made up of 300,000 flowers. Indoors he showcased an overtly feminine collection of scalloped hemlines, a colour palette of powder pinks in chiffon and lavender stripes. Quite far removed from his fetish display for the autumn/winter15 collection. 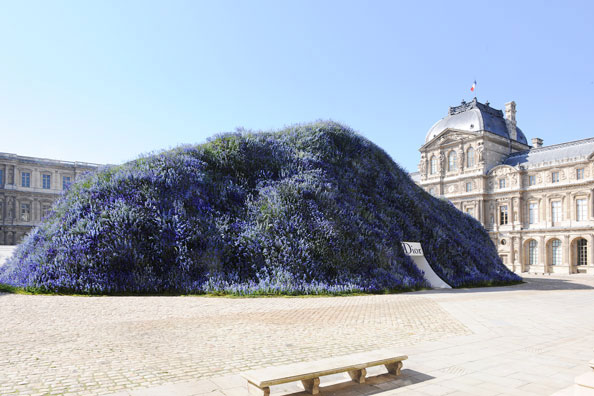