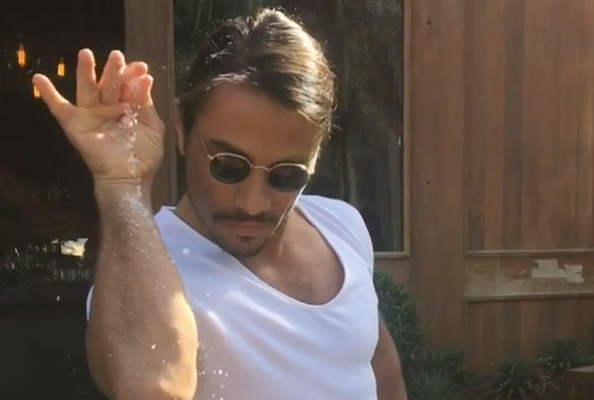 Whoever thought a video of a guy slicing up a steak would strike such a chord? (PS Vegans, look away now).

The UK has Nigella, the US has Anthony Bourdain, and the UAE? Well, we have Nusret Gökçe.

The Turkish chef, who’s behind Nusr-Et in Jumeirah’s Four Seasons Hotel, has found himself the current star of the internet thanks to his hypnotising Instagram feed.

A video of the restaurant owner sensually slicing up a steak outside his Dubai eatery has gone well and truly viral, receiving 3.3 million views in just a matter of days – along with news articles across the world dedicated to the short clip.

So why all the fuss? Well, you can’t deny that he sprinkles salt with a lot more sass than your average chef.

Hence the origins behind the nickname just given to him by his legion of fans – Salt Bae.

Gökçe, who splits his time between Dubai and Istanbul, is the brains behind the popular steakhouse chain Nusr-Et, which also has branches in Turkey.

Read:
So Many Stars Wore Lebanese Designers At This Year’s Golden Globes
12 Of Huda Kattan’s Best Beauty Tutorials From The Last 12 Months

Gökçe – who seems to love wearing sunnies in the kitchen even while handling the sharpest of knives (that’s how much of a pro he is) – has now become the subject of hundreds of memes and Tweets spreading across the Worldwide Web.

when your life’s a mess already filled with anxiety and depression yet you sprinkle some procastination for decor pic.twitter.com/Y7AIMGCrkQ

These vegan girls must be feeling proper left out after all this salt babe stuff ….so #saltbae pic.twitter.com/FJGlkA8bvX

This is the most accurate comparison I have seen yet 😂 #saltbae pic.twitter.com/Tam0ObGNod

Trust us when we say these are just the tip of the iceberg.

Even Bruno Mars shared an image of the chef this week:

Salt Bae is also just as stylish outside of the kitchen, with a penchant for embroidered scarves, Johnny-Depp-esque stubble, and white suits.

But the social media star hasn’t always been so successful – he told Turkish news site Aksam back in 2013 that had to drop out of school due to financial difficulties.

He later honed his trade as a butcher’s apprentice (with a stint in Argentina) before opening his first restaurant.

Well, it might have been a long, hard slog to the top, but he’s definitely getting the appreciation he deserves right now.

It might be months away, but we’re already plotting our Halloween 2017 #SaltBae costumes…