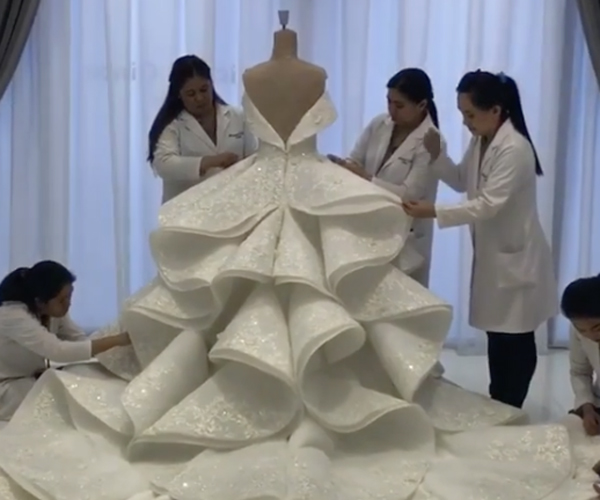 It’s the dress you’ll wear on one of the greatest days of your life, so most brides look for something extra-special for their big day.

However Dubai-based designer Michael Cinco takes wedding dresses to the next level with his couture creations.

Indeed, there’s no off-the-rack repetitiveness to the designer’s creations, as a new video posted by Cinco proves.

Read:
This Dubai Designer’s Wedding Dresses Are Seriously Out Of This World
A Dubai Designer Took Centre Stage At The Miss Universe Final

A giant team of seven dexterous seamstresses are pictured working on a strapless gown with a ruffled train that looks fit for a princess.

And, in fact, it actually is.

“The making of this exquisite wedding dress for a beautiful princess from Qatar,” Cinco, who is originally from the Philippines, captioned the clip.

It’s unknown exactly which royal the gown was created for, but we imagine it induced several gasps on its way down the aisle.

Read:
Real-Life Wedding: Thai-ing The Knot In A Tropical Koh Samui Ceremony
This Dubai Couple Booked Out An Entire Cruise Ship For Their Wedding

Just look at the finished product:

The couture designer, who set up his eponymous label back in 2003, is also a go-to for celebrities for red-carpet events, and has dressed Mariah Carey, Jennifer Lopez, and 2016 Miss Universe winner Pia Wurtzbach, to name a few.

So for now, we’ll just be wearing one in our daydreams…