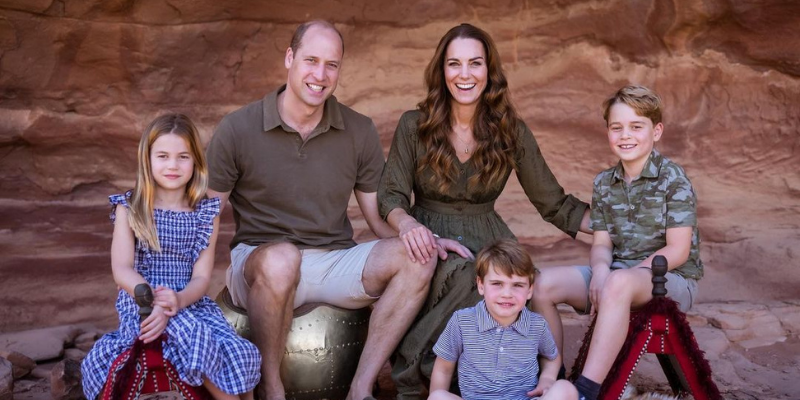 Each year, the Duke and Duchess of Cambridge release a family photo to the public to mark the festive season and 2021 was no different.

Over the weekend, a sweet photograph of the family of five featuring parents Princes William and Kate Middleton with their three children – Prince George, Princess Charlotte and Prince Louis – was unveiled from a secret holiday they had in the Middle East.

“Delighted to share a new image of the family, which features on this year’s Christmas card 🎄,” the Duke and Duchess of Cambridge captioned the new photo on Instagram.

The snap is from a private family holiday they had in Jordan earlier this year, according to a statement from Kensington Palace.

“The Duke and Duchess of Cambridge are pleased to share a new photograph of their family,” the statement said. “The photograph, which features on Their Royal Highnesses’ Christmas card this year, shows The Duke and Duchess with their three children Prince George, Princess Charlotte and Prince Louis in Jordan earlier this year.”

Specific timings of the family holiday haven’t been confirmed, but Jordan is a special place for both Prince William and Kate Middleton.

The Duke of Cambridge visited the country back in 2018 whilst on a royal tour of the Middle East and the Duchess of Cambridge actually lived in Jordan for two years when she was younger whilst both of her parents worked for British Airways.