Giving up a successful career to follow her passion for supercars, Alex Hirschi, also known as @supercarblondie, tells us about leaving your comfort zone for the dream.

How did you decide to make the leap out of your comfort zone?

I was a co-host on a radio show in Dubai for several years before quitting to set up my own business. I have always loved cars and have aspired to owning a luxury car since I was a little girl. I had the opportunity to drive a Bentley, at the time I pinched myself as I was driving my dream car! After that, I went knocking on doors, asking McLaren and Ferrari if they could possibly loan me one as well, in a professional capacity.

I started uploading videos on social media of my personal experience driving these cars for the first time. It got to the point where my husband and I would spend every weekend hunting down cars in order to film them. We would come home from our full time jobs at around 8pm and start working on editing and arranging cars for the next weekend until midnight.

We spent around 6 months uploading videos and photos almost every day on the side of our full time jobs, and grew my account to around 50,000 followers on Instagram. At that point, we had to make a decision, I loved my radio job, and it was a job that I had worked hard to get. Considering giving this up for an industry that was still so new to everyone including me, was a big risk but I took the leap of faith and put my all in to it. After a year I hired my husband full time. He quit his job in finance after 15 years to join me in building the business. He is my cameraman and my manager. After three years of doing this full time, my following has grown to around 37 million people across Instagram, Facebook, YouTube and TikTok.

What’s the bravest step you took to follow your passion?

The bravest thing I suppose has been to keep pushing on with the business even though I faced so much negativity from people online. When my videos started going viral and being seen by millions of people, this opened me up to the subjective opinions of all kind of individuals. After a while of trying to deal with this negativity myself, I realised I needed help, and went to see a therapist. I suppose that was one of the smartest, if not bravest decisions I’ve made. It often has such a stigma to it, when you seek help, but if I hadn’t have done that, I don’t know how I would have got through that initial phase.

Can you describe your career evolution & determination?

I graduated university in Brisbane and came to Dubai straight away. I was 22 years old and followed my husband here who had found a graduate job in banking. Unfortunately, a few months after we arrived the financial crisis hit and I found it very difficult to get a job. I took random freelance gigs here and there, wherever I could, just to make some money, but for the first year I couldn’t find anything full time. I then followed my husband to Singapore who got transferred there and that’s when I found my first full-time job as a TV presenter on a cable network about real estate.

My husband got transferred back to Dubai 6 months later but I decided to stay in Singapore, living with a local family in order to get some work experience. I wasn’t ready to move again and face finding another job again. I moved back to Dubai 6 months later and again couldn’t find a job in journalism, so I got a job as a receptionist in the DIFC just so I could pay the bills. After two years I quit and I’d finally found an opportunity to be a freelance journalist on the radio. I read the news on Virgin, Dubai 92 and Dubai Eye for several years picking up shifts as often as I could. This involved getting up at 3am every day for a year. I’m not a fan of early mornings so this was a tough year, but I loved the job! Then a few years later I scored my dream job as the co-host of an evening show on Dubai Eye. I did that for 3 years before quitting to set up my own company.

How do you feel while you’re driving these super cars?

It just makes me so happy. I could be having the worst day and then sit behind the wheel of a fast car and have a smile on my face within a minute. 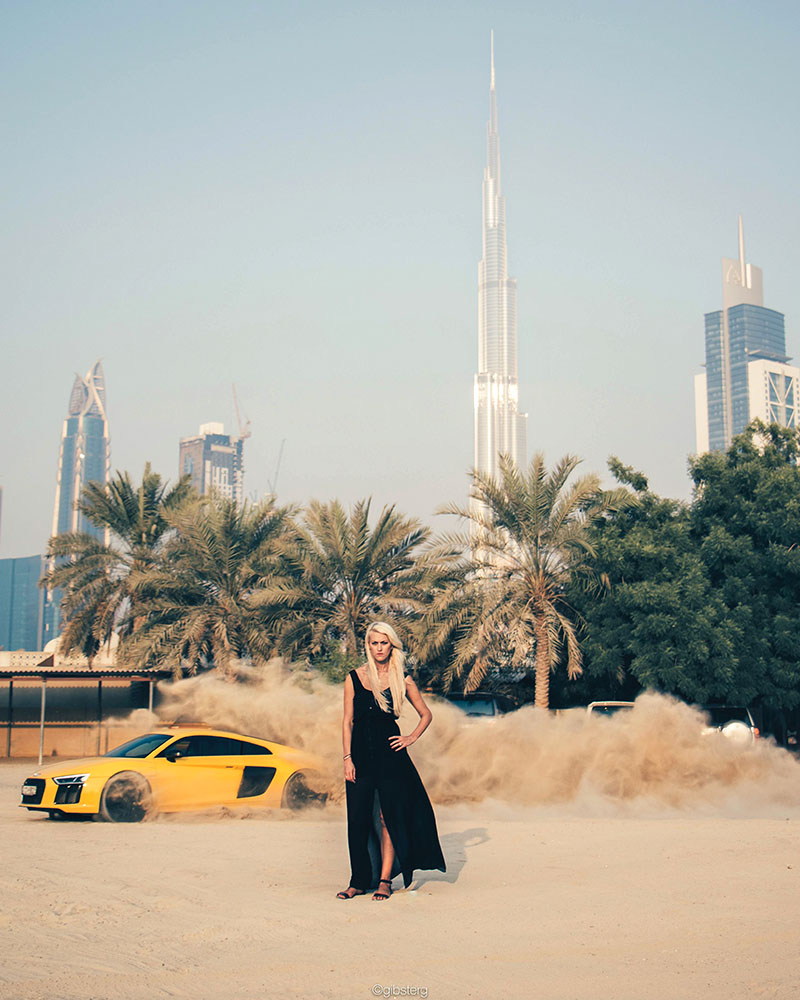 Tell us about having your husband as your manager?

It’s interesting! It was really difficult at first. We’ve gone through some rough patches because we are both really driven and we found it hard at first switching off ‘work mode’. We would literally be talking about work from the moment we woke up to the moment we went to sleep. It was hard for my husband too because he quit his career and had a lot to prove to both himself and me, that he had made the right decision, so he really went for it. Eventually, we found ways to draw a line between personal and work, but it’s always a constant battle and something that we work on every day. I’ve been with my husband since I was 17 so our relationship is the most important thing to me, and we do everything to make it work.

How has social media affected the industry?

The best thing is being able to connect to people all over the world. I am hardly ever a tourist anymore. When I used to travel, I just did all the typical touristy things, visiting monuments, going to tourist hotspots and tourist traps. Now, that never happens because whenever I travel to a city anywhere in the world, I will connect with other supercar owners or groups and they are all happy to show me around. This means I get to have a completely authentic experience of each city and each culture because I’m invited into the homes of locals.

This year has been challenging – how do you approach challenges?

Honestly, this year has been a blessing in disguise. I went through a period earlier this year where I wasn’t sleeping, I wasn’t feeling myself, and actually had a full burn out. When Coronavirus hit, it gave us an opportunity to rest, stay in one place and rework the business. It made us realise we couldn’t keep going the way we had been otherwise we’d both be burned out. We also had the opportunity to hire people and expand the team. Now, our team has expanded from 2 to 6 people in the last 6 months. I just hired my sister and my brother in law as well this month. They flew over to join the team from Australia. It’s super important to surround yourself with people you really trust in this business.

This issue is ‘The Bravery Issue’. How would you define bravery?

Not knowing the outcome, but taking a calculated risk. Doing something that puts you outside your comfort zone in order to achieve something greater.