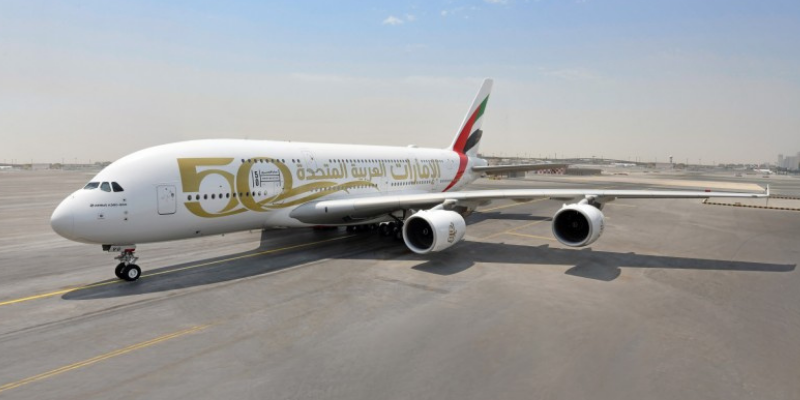 One of the UAE’s leading airlines, Emirates released a video on social media marking the country’s 50th anniversary with a behind-the-scenes of a special livery on their Airbus A380 aircraft.

The video reveals the entire design process with the aim of spreading the message of the UAE’s Golden Jubilee around the world.

The intricate installations of 50th themed decals wrapped on both sides of the aircraft fuselage in Arabic and English is part of the UAE’s visionary leadership which is carefully highlighted in the design as the country continues to make history.

His Highness Sheikh Ahmed bin Saeed Al Maktoum, Chairman and Chief Executive, Emirates Airline & Group said, “The Golden Jubilee themed aircraft are inspired by the vision, determination and passion of the UAE’s founding fathers and the incredible 50-year journey since they started to shape a nation that has captured the world’s imagination – from its rapid progress to become one of the most connected countries in the world, to being one of just a few nations to launch a space mission.”

By denoting the airline’s pride for the country, the first Emirates aircraft with the ‘United Arab Emirates 50’ anniversary livery, A66EVG made a debut flight to Frankfurt earlier this week raising the country’s flag with pride.

The fleet of aircraft is set to make their mark around the world wearing the special anniversary liveries as it’s due to visit popular destinations such as London, D.C, New York, Munich and Paris.