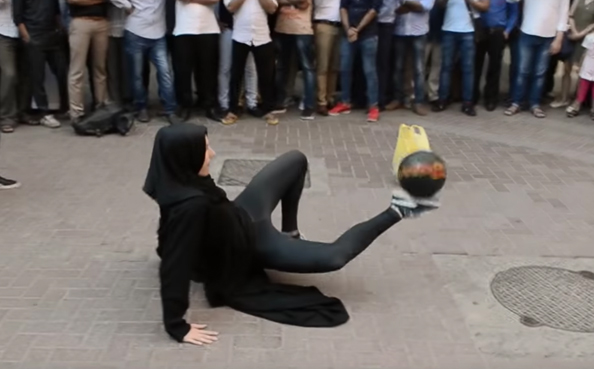 When crowds gathered in Deira market area to watch Football Centre Dubai players show off their ball skills, they were left stunned when one particular sportsperson, Melody Donchet,  made an appearance.

Dressed in a black abaya and hijab, a woman calmly walked into the centre where guys were showing off their tricks. Putting down her shopping bags at first it looked like she was going to confiscate the ball, but instead she put the guys to shame with a series of tricks that sent the crowd wild.

That’s not all, proving that women are just as good at football as men, she challenged spectators to try and tackle her – the efforts were hilarious with her Ronaldo-esque fancy footwork bamboozling her male counterparts. Ending the impressive session as calmly as she entered, after entertaining the crowd, she simply picked up her shopping bags and left.

But who is Melody Donchet? She’s actually a non-hijab wearing French World Freestyle Soccer Champion Melody Donchet, who has won various awards for her skills, including the Superball 2013 and RedBull Street Style 2014.

So renowned is Donchet’s skills that the commentators on YouTube were quick to point out they recognised her. One fan said: “Behind the scarf Melody wants to hide, but everyone recognises it! So she has a talent.” However, not all the comments were supportive with some saying they were offended she wore a hijab. That said most of the viewers seemed to appreciate that her message was one that encourages people not to judge a book by its cover.

Donchet is part of a group called Street Style Society (S3), which formed in 2006 and “offers an original and unique concept: mixing football, basketball and dance.” The group travel the globe and take part in events and comepetitions showcasing their skills. 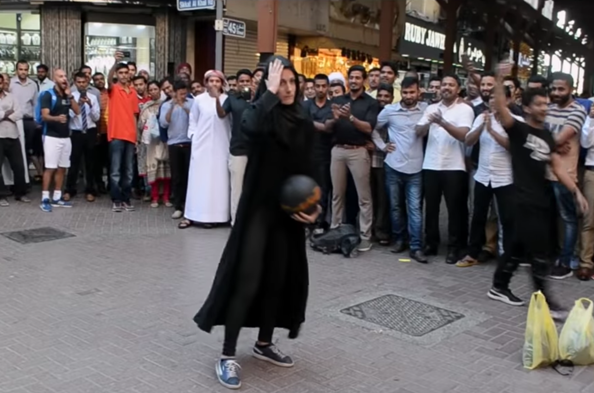 Melody Donchet adjusts the abaya after showcasing her amazing skills 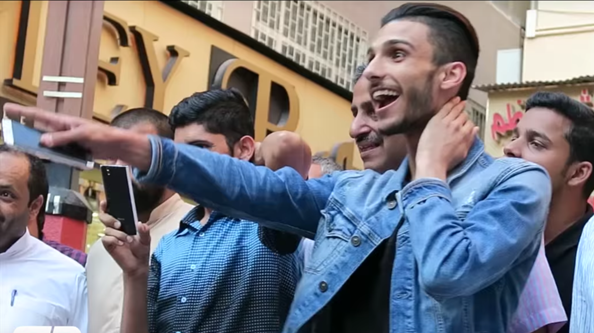 An impressed and shocked spectator

Travelling across the world from Paris to Doha, LA to Singapore, “S3 is Everywhere”. Here’s an incredible taster of what they do: