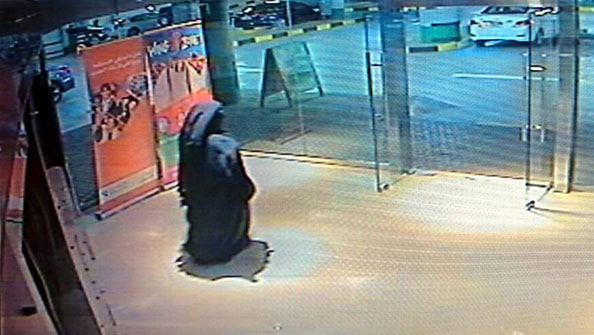 It was a story that shocked a nation when a woman, clad in a black abaya, stabbed to death a teacher in a toilet in an Abu Dhabi shopping mall back in December 2014. The murderer, a UAE woman, has now been sentenced to death for the Islamist-inspired killing.

Yesterday, the UAE court sentenced Alaa Badr Abdullah al-Hashemi, 30, to death for the killing of Romanian-born, American Ibolya Ryan, who was a teacher and a mother to 11-year-old twins.

The young mum was stabbed to death with a butcher knife during a shocking and unprovoked attack late last year at Boutik mall on Al Reem Island in the UAE capital.

The attacker was caught on CCTV footage leaving the scene of the brutal crime wearing an abaya, black gloves and a veil. Thanks to the footage the suspect was identified within 24 hours and arrested in less than 48 hours.

Alaa was arrested by police, who, just before the arrest, managed to successfully stop her attempt to explode a nail bomb outside the home of an Egyptian-American doctor.

According to The National Alaa “was also found guilty of sending money to al-Qaeda in Yemen, knowing the funds would be used in terrorist acts.”

Surrounded by four police officers as she stood in court, it is reported that she showed no emotion as her verdict was announced. One witness said: “As she was led from court she smiled and waved at her father and brother, who were in court to witness the proceedings.”

Alaa blamed her attacks on ‘evil spirits’, saying she had “unreal visions” and would see “ghostlike people”. While Judge Falah Al Hajeri ordered a full mental examination, the results revealed she was aware of her actions.

According to The National, he said: “The summary of the report states that the defendant is responsible for her actions, and that she was aware of and had the will to commit the crime, and no mental or emotional issue was found.”

The death sentence ruling was made by the Federal Supreme Court in Abu Dhabi, which means it cannot be appealed.