In what is a clear sign that the UAE is a dynamic and modern country in the Middle East, breaking through that glass ceiling, Dr Amal Al Qubaisi has made history by becoming the first woman in the Arab world to be elected as speaker of a national council.

It couldn’t have been better timed – a week before our Emirates Woman Woman Of The Year Awards in which we recognise and celebrate the region’s female game-changing visionaries, the humanitarians making a difference, the achievers smashing glass ceilings, and the artists using their creative vision and talent to help put the region on the map. Dr Amal Al Qubaisi is the UAE’s first female speaker.

The appointment of Dr Qubaisi as President of the Federal National Council – making her the region’s first female leader of a national assembly – was a historical moment.

Dr Qubaisi said: “I am proud to take this seat for the first time as a woman in the Arab world. I dedicate this achievement to the great women of the UAE, and to the Mother of the Nation, Sheikha Fatima bint Mubarak.”

Related Story: What Does Feminism Mean To You? UAE Residents Speak Up

The inauguration was led by Sheikh Mohammed bin Rashid, Vice President and Ruler of Dubai, who said: “Today your service to the UAE people has become a responsibility. It is an obligation in front of Allah and the people of the UAE. Brothers and sisters, your council is held today and our country has become stronger, and our people more intertwined with their leaders.”

Related Woman: “If You Empower A Woman, You Change The World,” DVF On Feminism

In a powerful speech that touched on the upcoming National Day and Martyrs Day he added: “The UAE is proud of its martyrs and raises the UAE flag, the symbol of victory, up high. It is now important more than ever to instil the sense of patriotism and loyalty to this country amid the ongoing situations in the world.”

Related Story: The Truth About Feminism In Hollywood

Dr Qubaisi is a great role model in the Arab world, in 2006 she became the first woman elected to the Federal National Council.

Sheikh Mohammed bin Rashid commemorated the game-changing decision which is a be win for feminism in the region: “Emirati women have been great leaders and great achievers, establishing significant regional and global presence for themselves and the UAE.” 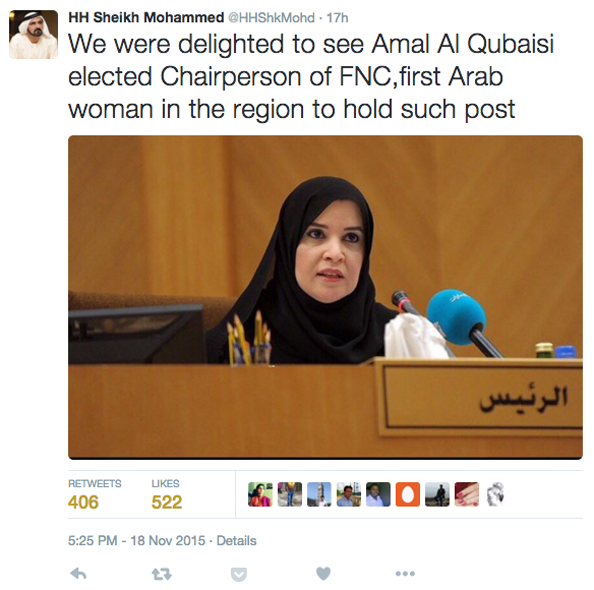