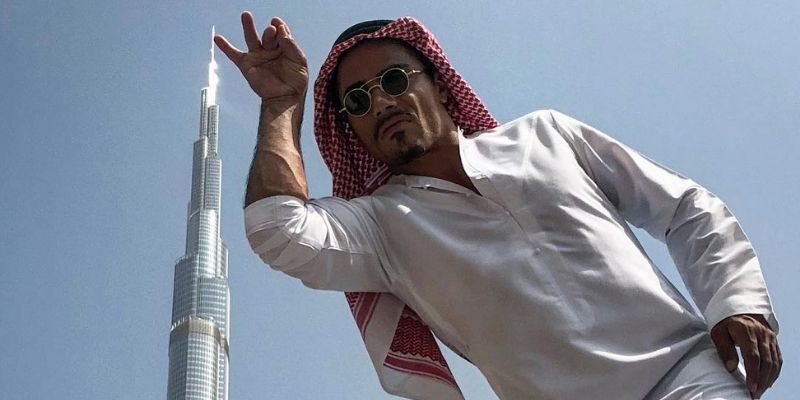 A viral sensation who became famous for his meat-slapping, salt-sprinkling and signature sunglasses in no time, Nusr-et one of the most visited restaurants in Dubai.

Chef Nusret Gökçe, also known as ‘Salt Bae’, has impressed many celebrity A-listers around the world, but he has also become a hit amongst the royal crowd.

After winning credit for all his memes, he’s surely managed to wow royal families from around the world, as well as here in the UAE.

His Highness Sheikh Mohammed bin Rashid Al Maktoum, Vice President and Prime Minister of the UAE and Ruler of Dubai

Sharing a photo to Facebook, the chef revealed the Ruler of Dubai visited one of his establishments back in 2017. The Ruler of Dubai paid a further visit to his Jumeriah Beach Road restaurant in 2018.

With restaurants both in Abu Dhabi and Dubai, His Highness Sheikh Mohamed bin Zayed Al Nahyan, Crown Prince of Abu Dhabi and Deputy Supreme Commander of the UAE Armed Forces, is seen laughing in this image, as he received yet another royalty’s stamp of approval. The shared image of him displays him shaking hands with the royal, captioning it “The King”. His Highness paid a visit to Salt Bae in 2017 in Dubai.

Belonging to the Alaouite dynasty, the King of Morocco was snapped in the lovely image with Salt Bae which he captioned saying, “Thank you for visiting me.” The monarch paid a visit to Dubai back in 2018.

Posing with Jordan’s reigning monarch King Abdullah II and his wife Queen Rania, Salt Bae met the royals in 2017. Upon their visit three years ago, Salt Bae shared some photos of himself with the Jordanian royals and thanked both the king and queen for their hospitality and generosity.

On our next visit to the world-renowned restaurant, we hope to capture a snap with Salt Bae himself if he’s in town.