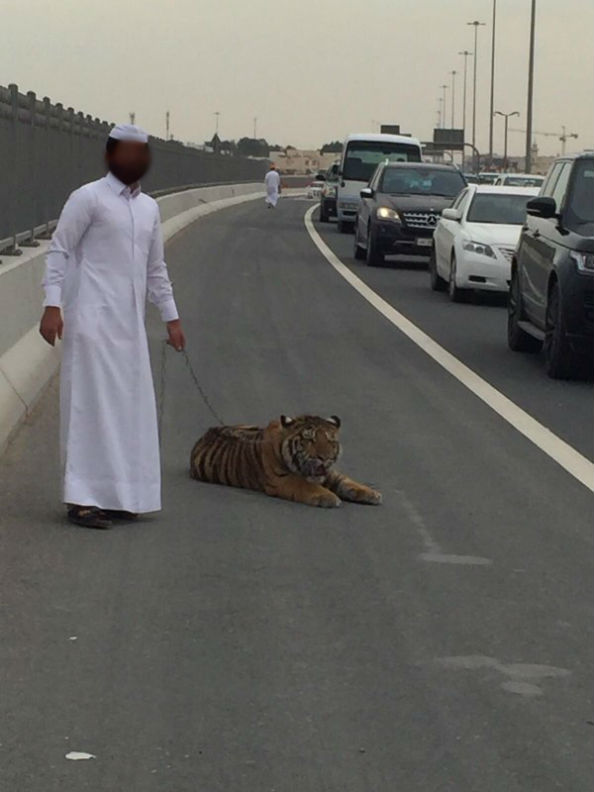 A video cropped up yesterday showing a tiger on the loose in the middle of Doha. It seems some haven’t gotten the memo that keeping wild animals as pets is not only cruel, but dangerous.

The tiger can be seen falling out of a truck in one video, and in another has been filmed prowling through traffic in the Al Rayan area.

Here’s the moment it all kicked off:

This is how it all started, Tiger on Doha highway https://t.co/xARKBn05Ve#TigerInDoha#نمر_في_شوارعناpic.twitter.com/Po2FHYXPfj

This video shared by Emirati commentator and columnist Sultan Al Qassemi shows the tiger roaming around the road, going in between the cars. Al Qassemi captioned the video with: “The obsession of keeping wild animals by rich kids in the Gulf has gone too far”.You can only imagine how bewildered the poor tiger is amongst the traffic:

This obsession of keeping wild animals by rich kids in the Gulf has gone too far. via @AbdallaTaryampic.twitter.com/mUUqQATaAE

In a subsequent video, a man can be seen reaching under a red SUV and placing a chain around the tiger’s neck. However, photos were soon released of the tiger running loose with a chain still around its neck, which suggests that the owner isn’t very good at controlling his pet even when he’s got a leash on it.

Although keeping wild and exotic pets is common, it’s still highly illegal. The Doha authorities have said that they now have custody of the animal, with the Ministry Of Interior also stating in a tweet that the owner of the tiger has been identified.

We assure all that the concerned authorities r following up with what has been trending over spotting a tiger in some areas of the country.

The tiger was handed over to the competent authorities and further legal proceedings have been initiated. #MoI_Qatar