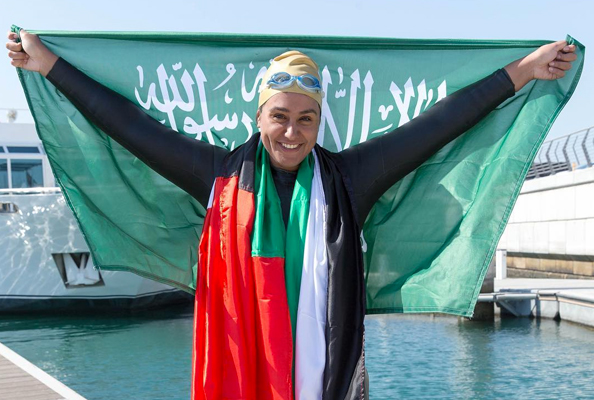 A woman has just set a word record with an epic Dubai-based swim, and she did it all for a great cause.

After setting out at 5am on Friday, Binladen completed the 24-kilometre trek by 2.10pm – meaning she spent a whopping nine hours and 10 minutes in the water.

However, this distance pales in comparison to her previous feats, which include swimming the 163km length of London’s River Thames – making her the first woman to do so.

Binladen is also the first Saudi woman to complete an assisted swim across the 34km English Channel.

“I am thrilled and delighted to become the first person to complete a 24km swim along the wonderful yet challenging Dubai Water Canal,” Binladen said upon reaching the finish line.

I can’t believe it’s almost a year ago that I became the first women in History to swim the length of the River Thames (101miles 162km ).

“I want to extend my warmest appreciation and gratitude to HH Sheikh Hamdan Bin Mohammed Bin Rashid Al Maktoum, Crown Prince of Dubai and President of the Dubai Sports Council for his gracious patronage of the event, and to the team members who worked really hard over the past month to make this great event a memorable success.

“I would also like to thank all the people who turned up just to cheer and encourage me throughout the day.”

Binladen also said she hoped her latest efforts would motivate more and more women from the Arab world to take up sport.

The humanitarian collects donations for the UN Refugee Agency through her swims, and people can pledge via her website.