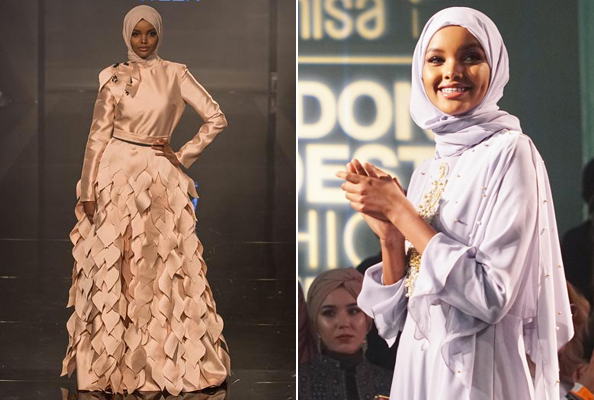 Plus, see our top looks from the second-ever Muslim-friendly fashion extravaganza in the British capital…

2017 is most certainly Halima Aden’s year.

First she was signed to IMG Models, then she walked for Kanye West’s New York Fashion Week show, and then she made her Milan Fashion Week debut, sharing the catwalk with supers including Gigi Hadid.

And now, the Somali-American teen has taken London by storm.

Read:
Halima Aden Just Made Her Milan Debut Alongside Some Fashion Superstars
Kanye West Cast This Barrier-Breaking Hijabi Model In His NYFW Show

The 19-year-old model, who rose to fame last year after donning traditional Muslim dress to compete in a US beauty pageant, opened for three shows during the second-ever London Modest Fashion Week.

The weekend-long event was held in the capital’s Olympia, with 26 designers showcasing their collections.

This edition of LMFW was sponsored by online shopping site Modanisa, while the first incarnation in February was organised by modest fashion e-tailer Haute Elan.

The most recent also saw talks and workshops take part as well as catwalk shows, with Aden speaking at a panel focused around the topic of ‘Do What You Love’.

One of my highlights 💞 Because sharing your story is powerful and we deserve to have our voices heard. I was inspired SO much by these women. We all have a role to play in shaping our society, what will yours be?

The teen has previously opened up about her rise to fame, revealing she was “never expecting” to forge a career in the fashion industry.

So, what else happened at #LMFW?

With tens of designers taking to the stage, there was plenty of sartorial inspiration.

Here, we’ve gathered up the best of the snaps from the weekend to fuel your next wardrobe overhaul… enjoy!

Ever seen such a vibrant shade of green? Another stunner by @tiara_syafruddin at @modanisamodest