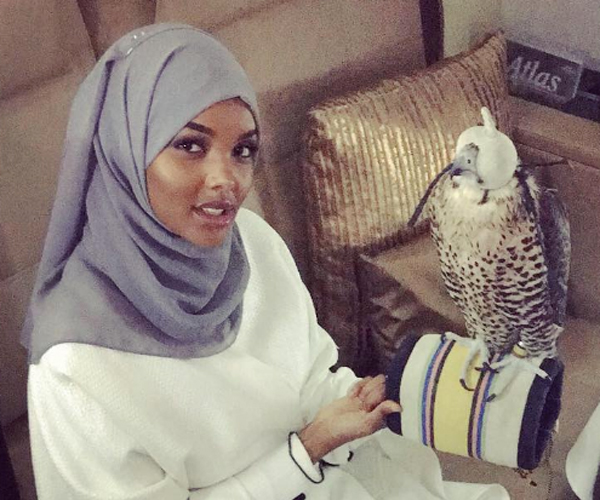 Halima Aden has touched down for a trip to the Emirates, and looks to be getting straight into the spirit of things.

She’s landed magazine covers, modelled for top brands including Yeezy and Alberta Ferretti, and has been snapped up by top agency IMG Models.

The Somali-American teen, who rose to fame after donning traditional Muslim dress to compete in a US beauty pageant last year, has been dominating the fashion industry of late.

Read:
Halima Aden: ‘My Hijab Is A Choice’
Halima Aden Just Made Her Milan Debut Alongside Some Fashion Superstars

However it looks just she’s just scored a little time overseas for some quality sightseeing.

The 19-year-old, who made headlines as the first hijabi to model for some major Fashion Week shows this year, has touched down in the UAE this week.

Looking forward to the next few days !! I am so excited to join the @etihadairways family ❤️ #FashionTakesFlight ✈️

Aden was flown into the Emirates by Etihad Airways for the annual Arabian Travel Market exhibition, where she posed with a falcon in a set-up of the airline’s onboard three-room suite.

My new Falcon friend and I take Dubai !! We both agree that there is no better way to fly than in the luxury of @etihadairways ! #runwaytorunway #FashionTakesFlight #ATM2017

(Yes, Etihad really does have a class that includes a living room, bedroom and en-suite on its A380).

“My new falcon friend and I take Dubai,” the model captioned the shot.

Aden, who was born in a Kenyan refugee camp, also took in Abu Dhabi during her trip, where she appeared to stay at the Rosewood hotel on Al Maryah Island.

The teen posed with a hotel sculpture during her stay, wearing a black hijab and sleek white separates.

The model spoke out about her rise to fame in a recent interview, revealing she was “never expecting” to forge a career in the fashion industry.

one of my favorite looks !🌞