This Saudi adventurer has just landed a major endorsement deal 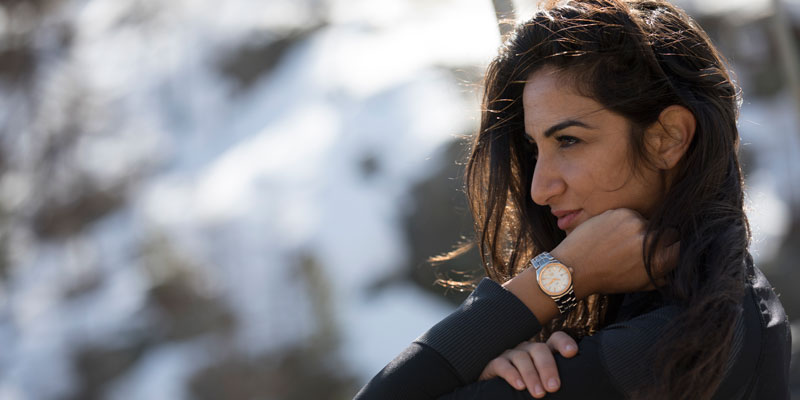 Is there a mountain Raha Moharrak can’t climb?

We’re on the record as huge fans of Saudi mountaineer Moharrak – she was our Woman of the Year in 2016 – and now she’s added another feather to her cap.

The 31-year-old has just signed with Swiss watch company Tag Heuer as a brand ambassador, joining model Bella Hadid as the first women to front the brand. We’re so thrilled to see Arab women getting the kind of recognition they deserve.

I’m often asked why would a desert born Arab woman climb such infamous mountains, in all honesty, I would love to have a deep profound reason, but the truth is, I climb because I believe I can, I never really cared about being first youngest or making history I would have still climbed had I been the hundredth oldest anonymous, all I wanted was to prove to myself that I could attempt the impossible and maybe even achieve it, those windy days above the clouds I stood shoulder to shoulder with my opposite gender an equal forever proving that we are capable of wonders we just need to be brave enough to dream them, to a determined heart nothing is impossible, even for a Saudi woman to touch the sky. #sevensummits #alaska #denali #climbing #everest #ineedashower

Nicolas Pic, the company’s Middle East brand manager, said it was a great honour to have Moharrak on board.

READ:
This Saudi adventurer is on a Mission to get more women into sport
Saudi Arabia has just ruled that women will be allowed to drive

He’s right to point out that Moharrak is pretty incredible. On top of scaling seven of the world’s highest mountains, she’s involved in work to get more of her countrywomen moving.

“I’m really trying to change this mentality that sports is just for boys, sports is just football and medals and winning,” she told CNNMoney in May. “It’s not that. Which parent would not want their child to grow up healthy?”

Another perfect example why I should stick to sports, because no matter what I do, I can never stay serious for long on an interview or a shoot lol. Outfit by the elegant @ayeshadepala Flowers by @plaisir_cadeaux Makeup by @samaneh_zabedini Photographer @faadhilasharief Location @d3dubai #ayshadepala #naturalhair #mydubai #d3 #behindthescenes #myplaisir

Change is coming in Saudi Arabia, with the recent announcement that women will be allowed to drive, and the opening of women’s parks and gyms. Women like Moharrak are leading the charge, and we love her attitude.

“To a determined heart nothing is impossible, even for a Saudi woman to touch the sky,” she said on Instagram in August. Her work ethic and dedication is inspiring.

“I’m a desert-born Arab woman; almost everything was difficult! From training to gear preparations, societal pressures, and even visa applications, it was all challenge,” she told Emirates Woman last year.

“But it was worth the heartache.”