This Palm Jumeirah Penthouse Might Be The Home Of Our Dreams 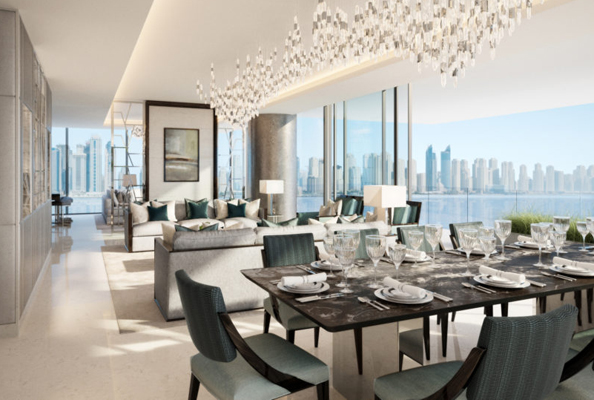 At Dhs180 million, it’ll be the most expensive apartment of its type in the city.

Dubai isn’t short of a fancy flat or two – but one is gunning for the title of the city’s priciest.

The 60,000-square-foot penthouse will sit atop a new development coming to Palm Jumeirah, and will feature all the added extras you’d expect from a Dhs180 million listing.

Made up of eight bedrooms and seven bathrooms, the apartment is the feather in the cap of One Palm, a 90-residence development currently in construction.

Located on the trunk section of the palm-shaped island, the 910,000sqft building will reach 100 metres high when finished.

The 25-storey tower is slated to open next year according to developers Omniyat, Gulf News reports.

So, just what can you expect from a multi-million-dirham apartment? A lot.

The penthouse will offer sea and marina views, and feature internal lifts, an infinity pool, a his and her’s bathroom and spa, a safe room, Jacuzzi, landscaped terraces and 12 parking spots.

There’ll also be staff quarters, a private lift from the lobby, a library, office, study and kids’ area.

Even if you don’t have the penthouse, the amenities for the other 89 apartments – made up of three to five bedrooms – aren’t too shabby. All residents have access to a private marina, gardens, a gym and spa, and indoor and outdoor pools.

You could never get tired of waking up to a view like this… . . . #bedroom #roomwithaview #oceanview #interiordesign #roomdecor #palmjumeirah #palmdubai #mydubai #onepalm

Add to that a salon, cinema, restaurant, BBQ area, concierge, and butler services, and you’ve got yourself a pretty plush pad.

Read:
Leonardo DiCaprio Gets His Steak Personally Seasoned By Salt Bae
This Swanky Palm Jumeirah Hotel Is Set To Open Next Month

Ominyat says it has already heard from some interested parties about the penthouse, but is holding off until nearer the completion date to confirm a sale.

“The way it’s been designed it is quite a large crown on top of the building, which itself is 100 metres high,” Mahdi Amjad, the developer’s CEO, told Gulf News. “We are seeing the price tag change significantly.

“It’s on purpose we want to hold back the penthouse sale. A developer can have the best properties on the best locations … but he will also need to make sure to have the right neighbours and operations. That’s what we are working on.”