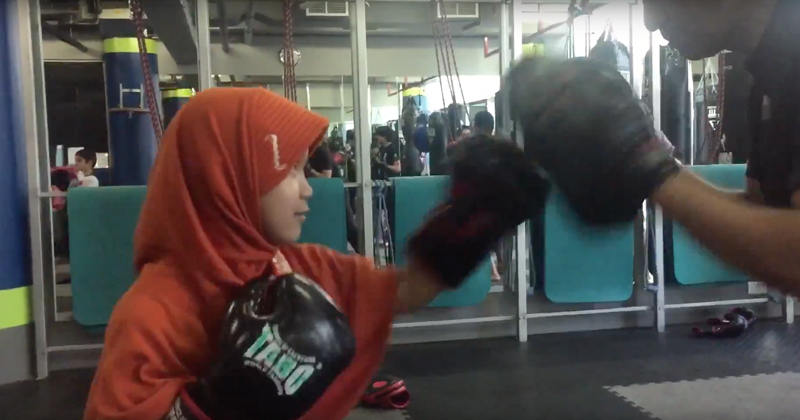 There was Muhammed Ali and there’s Manny Pacquiao, but when it comes to stars in the world of female boxing Muhammed’s daughter Laila Ali is probably one of the few names people remember. That was until this nine-year-old Indonesian girl came along.

With a sharp jab, right hook, left hook and swift tuck, at just nine Azizah Nur Laila is already wowing the sporting world and has been dubbed a “beast” at boxing thanks to her incredible sporting prowess and power.

A video of Laila in action has gone viral showcasing the mini sporting star during a training session with her boxing instructor Adam Kechil in a gym in Dubai.

The video, which was filmed a year ago, shows Laila being put through her paces. While the workout is relentless she remains in control and strong, like an absolute pro.

Seriously, if ever you wake up in the morning and feel like you can’t be bothered to hit the gym, you need to watch this video of Laila in action.

Kechil posted the video of Laila to prove that women are just as capable of reaching their sporting potential as men, and in this case even surpass the men.

Meet The Parkour Women Of Iran

The instructor quickly realised that Hijab-wearing Laila was throwing punches faster than the older boys in the class. In fact, in less than three months of training Laila was beating her classmates and was even faster than Kechil, boasting a hugely impressive reaction time. “She is faster at punching than I am at holding the pads,” he said.

A short story about 5 exemplary children from Indonesia.

They walked into my Kids Boxercise class in September 2015 and in 5 months they have shown what can be achieved through commitment and dedication.

However it’s more than them just being the best kids (better than some adults) at Speed pads, they have inspired an old man (yes, me).

They have taught me the beauty of teaching children and reinforced my belief that good and polite kids exist.

Today was their last day as their farther no longer had a job here in Dubai and I found myself more than a little tearful.

They were tears of happiness, achievement and tears of sheer distraught. I didn’t expect our journey to be over so soon and moreover so suddenly.

Maybe I take my job too seriously or maybe I’m just human?

I will miss them as they continue their life and I wish them the best for now and in the future, long after I am dead and buried

This is Azizah Nur Laila – she is 9 years old. Listen to what I say about her at the end.

Basically if I was the Master Jedi in her eyes 5 months ago she now took over and proved she is better than me….

Posted by The Fitness Coach Kechił on Friday, 4 March 2016

The annoying saying “punch like a girl” has been given a whole new meaning and for that we thank you Azizah Nur Laila.

Laila has broken down barriers, proved women are capable of anything and for this, she is now our new sporting idol.