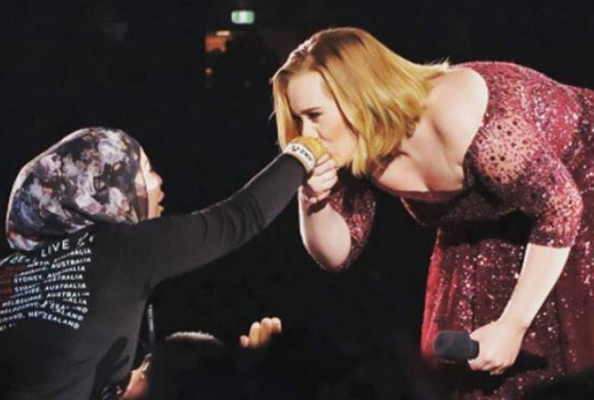 This songstress kisses the hand of a Muslim woman at her latest gig – and Twitter goes wild.

The British singer has been touring Australia over the last few weeks (wearing a rather spectacular Zuhair Murad gown, we hasten to add), where she’s been performing to sell-out crowds.

However, during one of her Sydney shows, it was a brief meeting with a fan that stole headlines, not her dress.

The Hello crooner reached out to touch a hijab-clad woman in the crowd, and the fan kissed her hand.

Adele then returned the embrace, and the subsequent image and video clip has set social media alight.

Many commended the singer’s actions on Twitter, describing the encounter as an act of inclusivity, especially in the face of a recent EU ruling allowing the banning of hijabs in the workplace.

Adele kisses a muslim fan’s hand as a form of respect.
A true feminist icon ! pic.twitter.com/Isg9Cc1Swv

The lucky fan was Samira Dandachl, who said she “couldn’t believe her luck”.

Read:
Will Smith Is Back In Dubai, One Of His Favourite Cities
There’s A New Restaurant In Dubai That’s Inspired By Sheikh Mohammed

“Adele had just finished singing When We Were Young when my fiance, Adi, lifted me up on his shoulders,” she told Nine News.

“I was crying, and she said ‘don’t cry darling’ and I kissed her hand. She returned the favour and kissed my hand back.”

Let’s hope she performs in the UAE soon… and this time we’ll be the ones in the front row, waving ecstatically.