This Emirati Teen Author Could Be The Next JK Rowling… 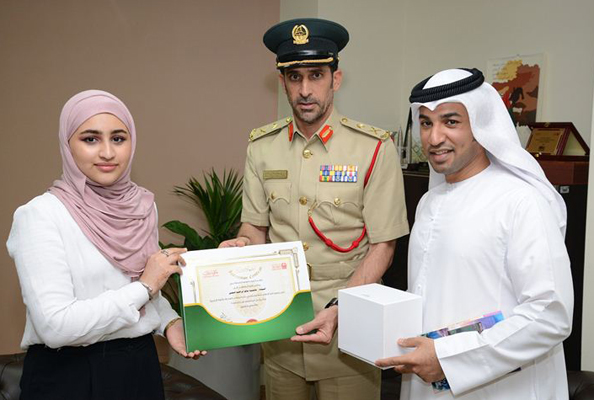 She’s only 14, but she’s already on her third novel.

If we had to put money on the world’s next smash-hit author, we’d put it on Aysha Al Naqbi.

The Emirati schoolgirl is just 14, but already she’s working on her third novel – and she’s just been recognised for her talents.

Al Naqbi, who published her first novel in 2015, has been announced as the youngest member of Dubai Police’s Council of Young Leaders.

It was such a mind opening and amazing experience that happens once in a lifetime. Thank you @DubaiPoliceHQ for this🖤 I’m still speechless https://t.co/OHOq9dwcOB

Read:
Is A Car A Public Or Private Space? Iranian Women Spark Debate With Their Hijab
This Lebanese Designer Created A Fairytale Wedding Gown Fit For A Brand-New Royal

The teen was congratulated by the force’s commander-in-chief, HE Major General Abdullah Khalifa Al Marri, in a ceremony this week, where she described her new accolade as “surreal”.

“It is surely a great honour and a greater responsibility to be here,” Al Naqbi said.

“I am glad to join the force’s youth council that works hard to ensure voice of the youth is brought to the table and to implement strategies that empower and engage youth in the development of the safety and security of the emirate.”

Thank you to everyone that came to #ADIBF2017 I had a blast. And to be able to talk to over authors and get advice is something amazing👍🏻 pic.twitter.com/NRK3G5Gjml

The writer was 13 when her first English-language novel Blue Moon was released, a young-adult fantasy tale that follows the journey of an adventurous teen who finds herself in a remote village.

Al Naqbi’s second work, Emerald Planet, was a sequel to her first, while her in-progress third novel will “be set in a fantasy world where a prince and princess live in their fancy kingdom”, she revealed at the Dubai Police ceremony.

Read:
Why The Rich Kids Of Saudi Are Grabbing The World’s Attention
Nike’s Tapped Five Middle Eastern Women To Star In Its New Campaign

The teen, who has described herself as “very ambitious”, says she hopes her work helps break down stereotypes about the Middle East.

“I feel like these days people outside [in the West] have a certain mindset about Arab people,” she told Gulf News earlier this year.

“I hope with me writing [Emerald Planet] it breaks that stereotype a little bit, breaks the mould.”