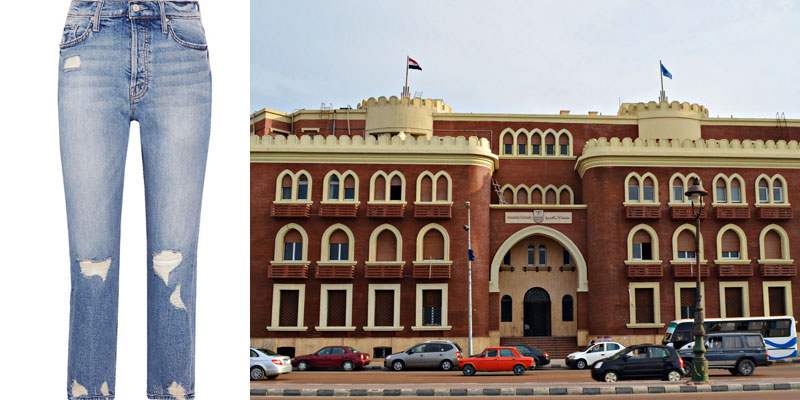 “This type of attire is inappropriate and goes against our values, traditions and religion.”

Egypt’s Alexandria University has banned its students from wearing ripped jeans on campus, ruling that distressed denims are indecent.

The university’s dean of agriculture, Tarek Serour, made the announcement last week, and confirmed to local paper Al Masry Al Roum that students wearing ripped jeans would be asked to leave.

Tight clothes and religious garb were also not allowed, the paper reported.

READ:
Hotels in Egypt now have the power to ban women in burkinis
Sheikh Mohammed has stepped to help this landslide-stricken nation

“I immediately ordered our head security officer to meet with the girls and inform them that their attire isn’t allowed on campus. I also issued directives allowing security guards to ban any student wearing such clothes from entering campus,” Serour told Al Marsy Al Roum.

“This type of attire is inappropriate and goes against our values, traditions and religion.”

Reaction on social media was mixed, with some supporting the ban and saying they felt uncomfortable seeing both men and women in ripped jeans. Others said that Egypt’s universities had bigger problems than the attire of their students.

The ban isn’t Egypt’s only clothing restriction in recent months. In August, the Ministry of Tourism first ruled that hotels could not ban women in burkinis from entering their pools, and then reversed the decision.

In July, a hijabi woman was allegedly forced out of Egypt’s Hacienda Bay for wearing a burkini at the popular beach resort.