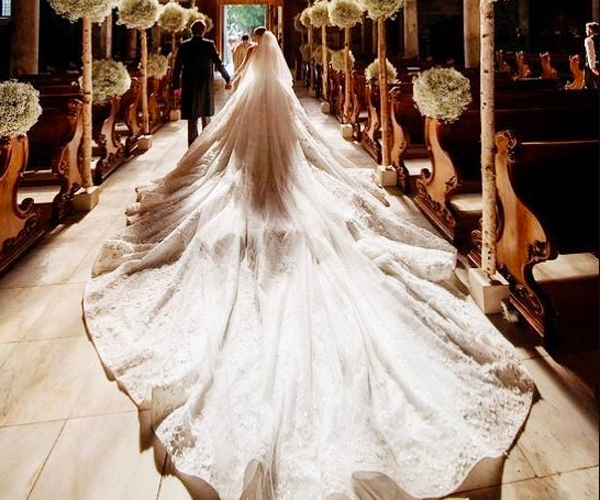 We’ve previously fawned over the work that goes into creating Michael Cinco’s out-of-this-world wedding dresses – and this latest one is no exception.

The Dubai-based designer dressed singer Victoria Swarovski for her wedding day this weekend, and the crystal-encrusted dress is going straight on to our Pinterest boards.

The Austrian pop star – who yes, is a heiress to the Swarovski crystal empire – tied the knot with her real-estate investor fiance Werner Mürz in Trieste, Italy, on Saturday.

Read:
The Work That Went Into Creating This Qatari Princess’ Wedding Dress Is Next Level
This Dubai Designer’s Wedding Dresses Are Seriously Out Of This World

And new details have just arisen about the fairytale-worthy concoction.

For her big day, the 23-year-old donned a gem-dotted gown with a six-metre train by Cinco, who is originally from the Philippines.

The tulle and lace gown was decorated with half a million gems supplied by the Austrian crystal brand, revealed the designer, who set up his eponymous label back in 2003.

Subsequently, the couture creation weighed in at 46 kilograms, with a value of more than US$1 million (Dhs3.67 million).

“I said yes to the love of my life!” Swarovski wrote alongside an Instagram snap of her wedding day.

The couple, who invited 250 guests to their big day, tied the knot in the Cathedral of San Giusto, before celebrating with a five-tier cake, fireworks display and hours of dancing.

Read:
This Hijabi Style Icon Is The Star Of Dolce & Gabbana’s New Campaign
Jessica Chastain Had A Bow-Down Moment In An Arab Gown At Cannes

The heiress, who also won the German version of Strictly Come Dancing last year, held a fitting with Cinco earlier this month.

The singer donned a plunging halterneck gown – which she later wore during a post-wedding party  – in a short video the designer shared on his Instagram page:

The couture designer is also a go-to for celebrities for red-carpet events, and has dressed Mariah Carey, Jennifer Lopez, and 2016 Miss Universe winner Pia Wurtzbach, to name a few.

So for now, we’ll just be dreaming about wearing one…