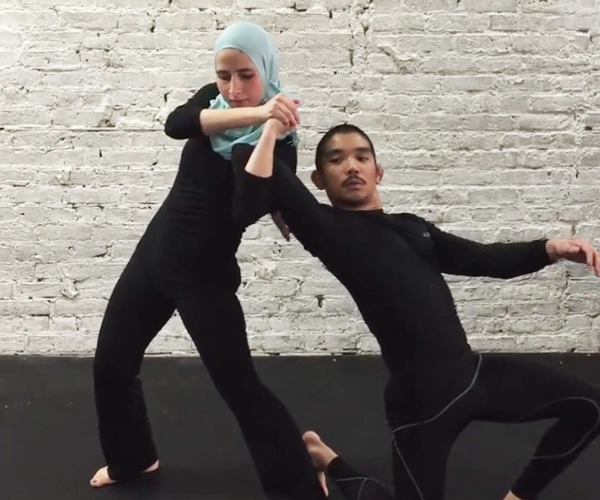 Since the US presidential victory of Donald Trump, reports have flooded in of an increase in Islamophobia on the streets of the USA.

Muslim women have shared their fears over wearing their hijab in public, and a legal advocacy organisation has recorded 701 reports of “hateful incidents” towards citizens since November 18 alone.

The verbal and written abuse directed towards Muslims is terrible enough, but when it turns violent, they may be caught up in situations in which they are required to defend themselves from physical attacks.

One attack in particular is known as the ‘hijab-grab’, which involves an attacker grabbing at a Muslim woman’s hijab in an attempt to pull it off. (And several women have reported said harassment this month).

Read:
What A Trump Presidency Might Mean For The UAE (And Women Around The World)
Gigi Hadid Apologises For Her ‘Racist’ Impression Of Melania Trump
Six Times That Hijabi Models Made Global Headlines

In her classes, Abdulla shows how to fend off an aggressor, and in particular, how to defend yourself against a hijab-grab.

Abdulla even released two videos on her Facebook page, which have since garnered close to 4 million views.

In the videos, which she put together with mixed martial arts trainer Miso Ceko, she demonstrates how to fend off a hijab-grab from both the front and behind.

How to fend off an attack from behind:

How to fend off an attack from the front:

On the posts, Abdulla writes: “In this post-election hate crime spike, self-defence is more important than ever.

“Practice this move until it becomes muscle memory and teach your body to react before thinking.

“This video is public. Please share widely, especially with our sisters in the ‘redder’ [Republican] states.”

As well as learning to defend themselves, they learned how to identify and report hate crimes, and what to do if caught as a bystander to a hate crime.

Abdulla is no stranger to helping others. She is also the vice-president of the organisation Deaf Planet Soul, which seeks to “serve and empower Chicago’s deaf and hard of hearing”.

As her full-time job, Abdulla works as an applied behaviour analysis therapist for children with autism.

She can now add full-time role model to her CV too.