These Hijabi Schoolgirls Are Total Rock Stars In The Making… 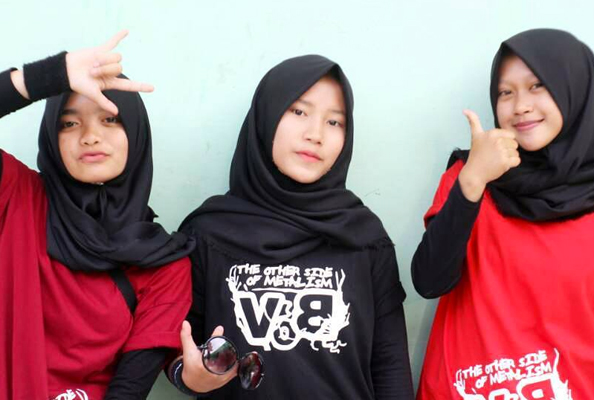 These teens are smashing stereotypes as they thrash out the tunes.

They’ve come a long way from just practicing after school every day.

These three teen schoolgirls, from Indonesia’s West Java, have made headlines and even appeared on national TV after skyrocketing to fame with their thumping heavy metal.

Known as Voice of Baceprot, the group is made up of Firdda Kurnia on vocals and guitar, Eusi Siti Aisyah on drums, and Widi Rahmawati on bass.

And the trio, as well as having a shared love of the rock genre, hope their music will help change stereotypes about Muslim women.

“Wearing a hijab should not be a barrier to [our] pursuit of [our] dream of being heavy metal stars,” 16-year-old Kurnia told Reuters last month.

“I think gender equality should be supported because I feel I am still exploring my creativity, while at the same time, not diminishing my obligations as a Muslim woman.”

The girls, who formed VoB in 2014, have written some original songs, but mostly perform covers from bands such as Rage Against the Machine and Metallica.

And even if that’s not your kind of music, you can’t deny that they’re totally killing it:

The teens were introduced to metal by their music-teacher-turned-manager, and it was love at first listen according to Kurnia.

“It felt so rebellious,” the student told The Guardian, adding that the band has faced criticism from many in their conservative home country.

Read:
Just What Are These Giant Letters Sprouting Up Around Dubai?
Why Melania Trump Covered Her Head In Rome, And Not Saudi Arabia

However the trio – who have been performing even as they fast during Ramadan – are ignoring any backlash.

“We can play metal and protect our morals. Of course Islam and metal can match. Why not?” Kurnia told the newspaper. “Metal is a just a genre of music. The problem is it is often associated with bad things, but it doesn’t have to be.”

Despite their rising success, the rockers have their heads firmly on their shoulders, with plans to finish high school before pursuing their dream of releasing an album and performing overseas.

And in the meantime, they hope to inspire other young women in Indonesia to shatter their own stereotypes.