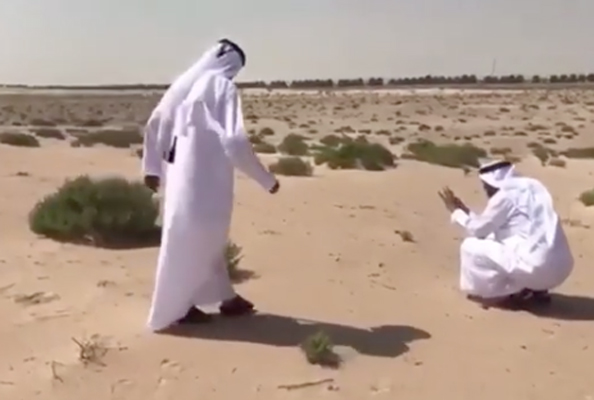 These rulers chose conservation over construction during a recent tour…

HH Sheikh Mohammed bin Rashid Al Maktoum has a reputation as an animal lover, thanks to the myriad snaps he shares of himself getting up close and personal with creatures of the world.

However a recent encounter has demonstrated just what he’ll do in the name of conservation.

The Vice-President and Prime Minister of the UAE and Ruler of Dubai was shown touring a construction site in Dubai in a video this week, along with HH Sheikh Mohammad Bin Zayed Al Nahyan, Abu Dhabi Crown Prince and Deputy Commander of the UAE Armed Forces.

As they moved through the sandy climes, the pair stumbled upon an endangered houbara bustard, as the clip posted by Lieutenant General Sheikh Saif bin Zayed Al Nayhan, Deputy Prime Minister and Minister of the Interior, shows.

The rare bird was actually laying eggs within the project site so, to preserve the species, the royal ordered construction to be moved to another location, What’s On Dubai reports.

The isn’t the first time both leaders have worked to help the houbara – one of the UAE’s national emblems – either.

Read:
Princess Haya Has Shared The Most Adorable Photos Of Her Little Athletes
A Saudi Teen Asked Her Dad What He Would Do If She Took Her Hijab Off

The funds aims to increase the bird’s population and relocate them around the region, and HH Sheikh Mohammed bin Rashid Al Maktoum has joined the IFHC to help release houbaras into the environment.