These Celebrities Have The Midas Touch Thanks To One Arab Designer Cannes 2017 has been a treasure trove of glorious gowns and bookmarkable beauty looks this week – however one designer has really had the golden touch when it comes to dressing the A-listers.

Lebanese label Elie Saab has kitted out a plethora of celebrities in ethereal floor-sweepers that make the wearer look almost lit from within.

In fact, the luxury brand – which has its main workshop in Beirut – must be among the most-worn labels at the annual French film festival this year.

Read:
Aishwarya Rai Just Had A Total Cinderella Moment Thanks To This Dubai Designer
Is This Sonam Kapoor’s Best-Ever Red Carpet Look? Quite Possibly… 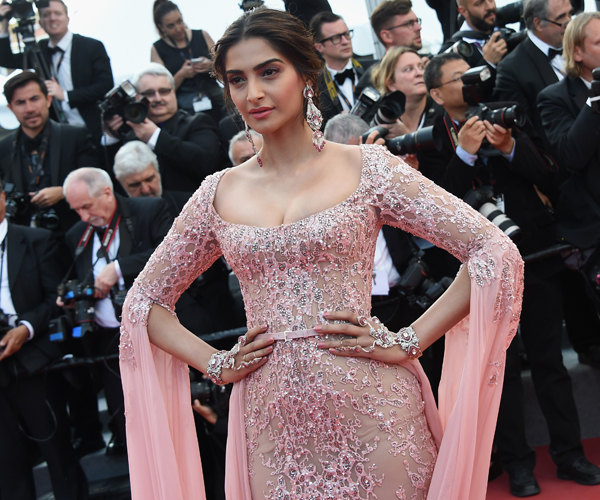 Saab stole headlines at the festival’s opening night with a theatrical caped gown worn by Chinese actress Fan Bingbing, and followed up with a haul of glimmering gowns for a quartet of supermodels at a Chopard dinner.

The label even gave Sonam Kapoor one of her best-ever red carpet looks with a romantic blush-pink number.

However it’s the most recent range of gilded gowns that has left us particularly green-eyed (because we really don’t have any occasion – nor the credit card limit – to wear one).

Ora’s cold-shoulder-cut gown with a demure high neck and Kurylenko’s sheer and blue-beaded number both come from Saab’s Spring/Summer 2017 collection.

Kapoor’s plunging full-sleeved dress with a billowing train was, however, a custom haute couture creation.

The label also dressed supermodel Jourdan Dunn for The Killing Of A Sacred Deer screening, in a strappy number with quirky marine-themed embroidery.

Rounding out the quartet of Cannes hits this week was an artfully draped and belted combo donned by Fan Bingbing, which served up a hearty dose of French Riviera chic.

Read:
These Arab Designers Are Really Dominating The Cannes Red Carpets…
Arab Designers Were Responsible For Two Of Cannes’ Most Dramatic Looks

With just a few more days left of the festival (Cannes will finish up on May 28), we’ll keep you updated on the best red-carpet looks as and when they happen…