UP Next
X
Bowled Over By The UAE: Paule Ka's Creative Director Shares...
November 8 2016

Two British royals are currently in Dubai as part of a Middle Eastern tour – and one’s been getting on like a house on fire with our own Princess.

We do love a royal in the UAE – except this time around we’re not talking about our own, we’re talking about some rather special guests.

Prince Charles, the Prince of Wales, is currently swinging by the UAE with his wife Camilla, the Duchess of Cornwall.

They’ve already visited the capital, and now the royals are in Dubai on a series on engagements to mark their last day in the Emirates.

Why the visit to the Middle East? Well, the British heir to the throne is here to promote religious tolerance, support women in leadership, create youth opportunities, encourage military cooperation, and preserve cultural heritage and wildlife conservation. On that note, Prince Charles visited Dubai’s International Humanitarian City, where he paid tribute to the UAE’s generosity in terms of global aid.

“The United Arab Emirates and the broad spectrum of support that they offer could not be more needed in these complicated times,” he said.

“It is of course, merely a part of their long track record in helping those who are affected by natural disaster, not to mention the 65 million who are displaced by conflict.”

Prince Charles and Camilla were shown around the city by HRH Princess Haya bint Al Hussein, wife of HH Sheikh Mohammed bin Rashid Al Maktoum, Vice President of the UAE and Ruler of Dubai. Both royal women donned white for the occasion, with Camilla also opting for a parasol to shelter from the warm sun.

During their visit, the prince paid tribute to Princess Haya and Sheikh Mohammed’s “compassion”. 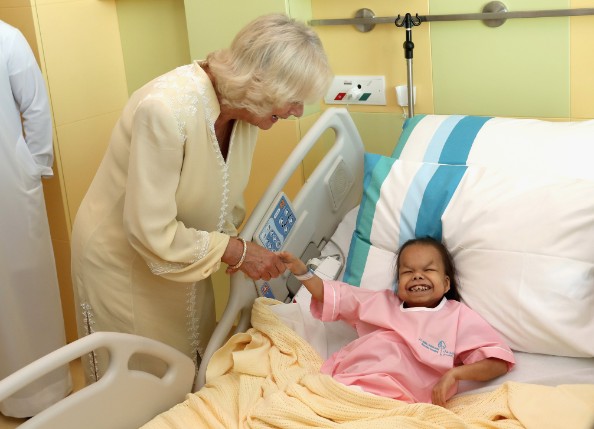 While in Dubai, Camilla also paid a visit to the Dubai Foundation for Women and Children, which is the first licensed non-profit shelter in the UAE for victims of domestic violence, child abuse and human trafficking, as well as a visit to the Al Jalila Specialty Hospital.

While at the hospital, the Duchess signed a partnership with Princess Haya between Alder Hey Children’s Hospital in Liverpool, UK and Al Jalila. 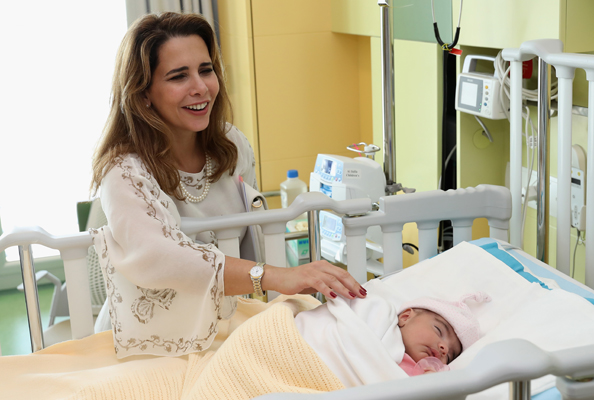 Camilla, who described the facility as “brilliant”, shared a giggle with Princess Haya as the two signed the agreement.

What did Prince Charles and Camilla get up to in Abu Dhabi?

They touched down in Abu Dhabi on Sunday, where one of their first engagements was at the capital’s awe-inspiring mosque.

Prince Charles and Camilla last visited Sheikh Zayed Grand Mosque when it was still in construction, and they looked impressed with the finished result.

The royals slipped off their shoes, and the Duchess donned a sky-blue hijab, as they toured the holy building along with some top UAE officials. 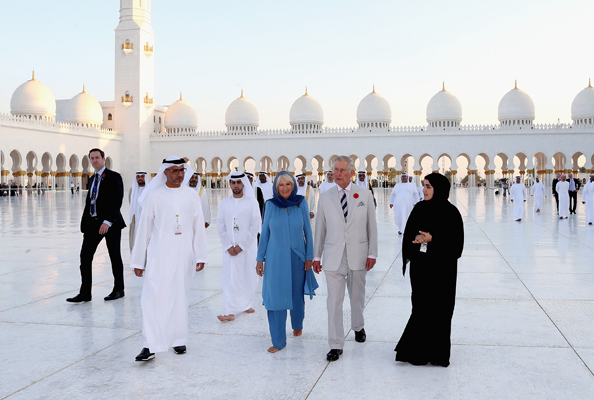 The couple were joined in Abu Dhabi by Sheikh Lubna, the UAE’s Minister of Tolerance, Sheikh Abdullah Bin Zayed Al Nahyan, Minister of Foreign Affairs and International Co-operation, and local representatives from several other faiths.

One of the day’s guests was Roman Catholic Bishop Paul Hinder, who told the Daily Express the Prince’s visit was about “recognition”.

“The prince was able to speak to us and see the mutual tolerance which is a reality in this country,” he said.

The Duchess also remarked on the number of UAE women in leadership positions, according to Sara Saeed Al Hameli, President of the Zayed University Student Council. 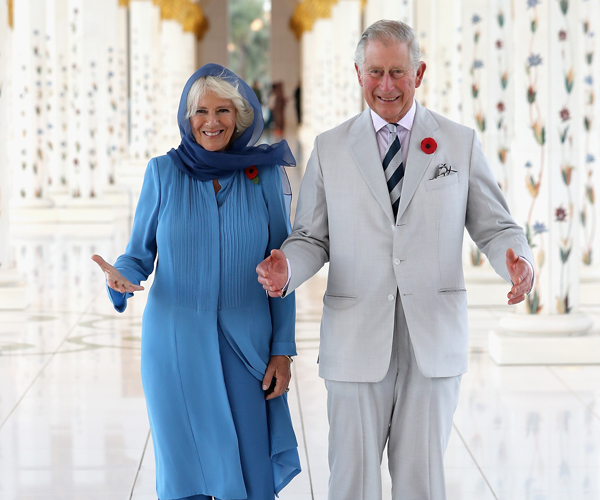 “She said she had never seen that in any other country…she also said she was very impressed with people’s positive attitudes in the UAE,” Al Hameli told Gulf News.

The Duchess also paid a visit to Abu Dhabi’s world class Falconry Hospital, where – despite her fear of birds of prey – she was able to hold a small owl called Baby. 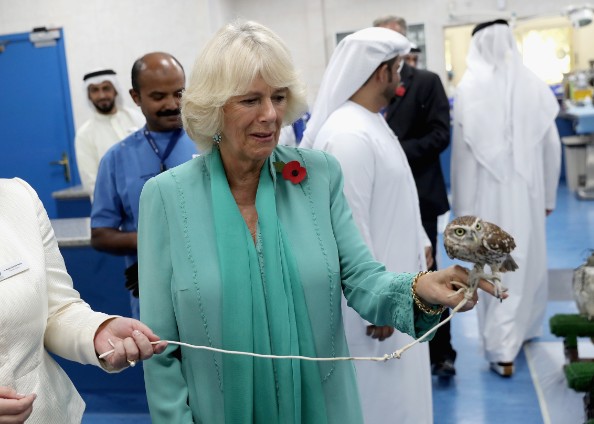 Meanwhile, Prince Charles was busy being driven around the private Bu Tinah island in the Arabian Gulf, which lies in the centre of a UNESCO Marawah Protected Marine Area.

He was taken on a boat tour of the surrounding waters in search of turtles, dugongs, stingrays and dolphins. 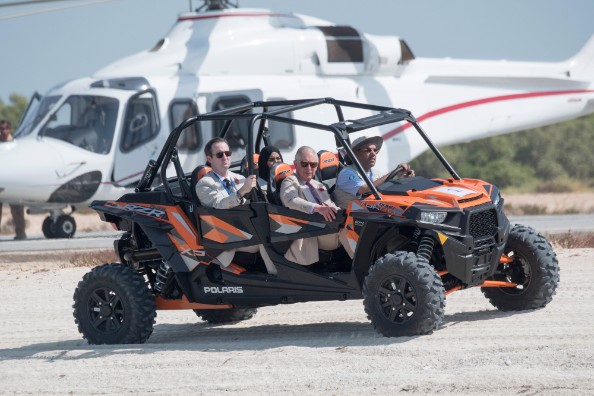 After that, it was off to Masdar City to the Masdar Institute for Science and Technology, where Charles joined finance leaders to address the challenges of sustainability, while his wife went off to the Imperial College London Diabetes Hospital to attend a tea with the theme of empowering women.

Lastly, the couple attended a cultural event at the historic Al Jahili Fort in Al Ain to launch the joint UK and UAE Year of Culture.

The 12-month collaboration will see the British Council and Emirati partners work together on a programme of art, literature, science, sport and trade.

WHERE WERE THEY BEFORE THE UAE?

The royals spent November 4 and 5 in Muscat, where they visited the National Museum of Oman.

As part of their welcome to the country, Prince Charles joined in with a traditional ceremonial sword dance:

The Prince of Wales joins in with a ceremonial sword dance during the fantastic welcome in Muscat, Oman, yesterday! 🇴🇲 For the full video from day one of the #RoyalVisitOman, follow the link in our bio. TRH are now off to the United Arab Emirates – follow #RoyalVisitUAE for updates.

While Camilla didn’t pick up a sword, she did drop into Oman’s first Children’s Public Library, as well as a reading initiative where she met young children who won a local writing competition.

Today, The Prince and The Duchess began the Royal tour, and what a wonderful welcome TRH received on day one of the #RoyalVisitOman! To catch up on the latest news from today’s visit, follow the link in our bio. 📸 Press Association

Between them, the royal couple also visited a nature reserve, where Prince Charles tasted some local honey, and Camilla met survivors at a cancer association.

The Prince is meeting inspiring Omani Young Leaders this morning as the second day of the #RoyalVisitOman begins. His Royal Highness met young people from various organisations and initiatives including @PrincesTrust @OutwardBounDO @BritOmani and @mosaicnetwork whose international programme helps inspire young people to become involved in their local communities. One of the young people here today is Anisa Al Raisi, who hopes to become the first ever Omani to reach the North Pole!

The royals will now spend some time in Bahrain nefore heading back to the UK.