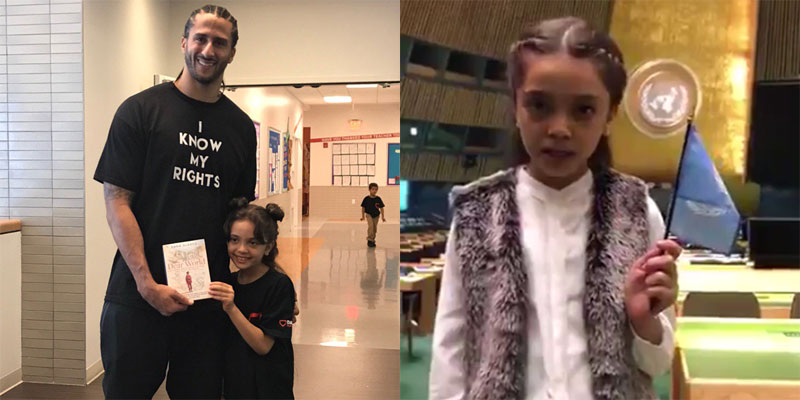 Bana Alabed was just 7 years old when she started tweeting from war-torn Aleppo and became known as Syria’s Anne Frank.

“Dear world. My name is Bana, I am 7 years old Syrian girl. My people are dying every day as you watch. This is the end of humanity,” read one of her early messages, written with her mother, Fatemah.

Her tweets got the world’s attention, and we were somewhere beyond relieved when news broke that she and her family had safely resettled in Istanbul last December. Since then, Bana has written a book about her experiences, and she’s now in New York with her mum to promote it.

Safe to say that a lot has changed for Bana since we first heard of her a year ago.

In an interview with the New York Times, Fatemah said the support of strangers during their last months in Aleppo was invaluable.

“We felt that the world was with us and that we are not alone,” she said, recalling her struggle to feed her children.

I am very happy to meet Colin @kaepernick7 . He loves peace and justice. We need more people like him in the world. pic.twitter.com/FttgVj1G1M

The family made it out of Aleppo on a packed bus that took 19 hours to make a journey that would usually last one, the New York Times reported. When they made it to Turkey, starving and thirsty but alive, Bana and her brothers fell upon food that was waiting for the refugees.

Now, Bana is enjoying the sights of New York, visiting the United Nations, and meeting with activist football player Colin Kaepernick. She’s been recognised on the street.

At the @UN this is my message to the world ” we can end the war”. Dear World, why are you silent? The Children are dying. Help us. pic.twitter.com/rUeDX0EgZr

Her message is one of peace. Here’s hoping the world is listening.