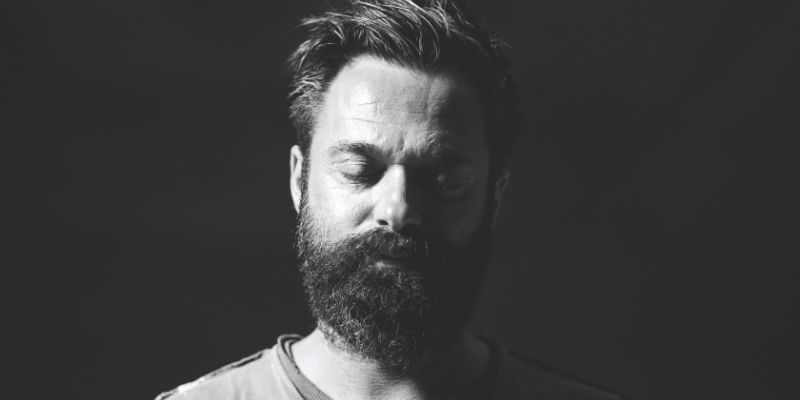 World-renowned artist Sacha Jafri is here to change the world one incredible piece of art at a time.

Can you talk us through your career – how did you find yourself in the world of art?

I went to Eton College, a school in England and I got an art scholarship there. I mainly played cricket and did my art – they were my two big things. I had a love of art, I would guess from age four, but I was heavily dyslexic, the world really didn’t make sense to me and I found things very difficult. School was a challenge and the only way I could make sense of the world really in my mind was through art, so when I was painting and drawing things made sense to me.

Art helps me feel I fit into the world and that’s why I continued painting and it’s the only place really where things made sense. So I developed that for, I guess, a sense of necessity rather than anything else and it became very explorative of emotion and expression.

After school, I went on to study Fine Art, Art Theory, Art History at Oxford University. From there, I got into the Royal Academy in London and by age 22 I had my own studio and I just started painting. I got very lucky, my first exhibition I had at age 23 and a lot of celebrities turned up – Madonna and Guy Richie, Sadie Frost, Kate Moss, Sir Roger Moore, Sir Michael Kane. I think their interest in my work obviously helped springboard my career, and at a very young age, I had quite a lot of attention, which can go one of two ways. Luckily, I didn’t really let it affect me, and it just supported as a platform for more people to see my work.

I learned a lot from Mr. Mandela, I worked closely alongside him and that really inspired most of my philanthropic journey, which began with George Clooney, John Prendergast, and Mr. Mandela, and that really inspired me to realise that art can be something more than an aesthetic, it can be more than a trigger to shock, it can be more than, a platform to evoke conversation and political satire, it can actually do more. It can elevate the soul, it can inspire us, and most importantly, it can help do good for humanity. I also worked closely with Prince William, helping with his charities on mental health, closely with his father, Prince Charles in the Prince’s Trust, supporting various children’s charities, closely with UNICEF, with the Global Gift Foundation, with a lot of charities around the world.

I found that when I was creating work that also helped less fortunate children and linked to humanity my work became better, more interesting, more poignant and seemed to have a purpose that I was interested in pursuing. 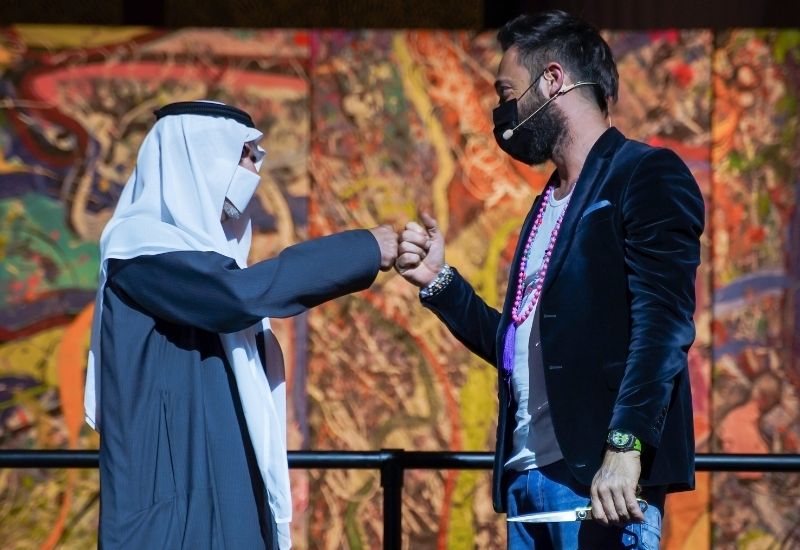 You recently broke the world record for the world’s largest painting. What brought about this project?

I felt that humanity wasn’t going in a very good direction. I had the biggest year of my life, 2020, where I was doing the Japan Olympic painting, a painting for the Expo in Dubai, and I was doing my 18 Year Retrospective world tour, which was going to 35 cities in 28 countries, and it was obviously a huge year for me. I have studios in Singapore, London, New York and Dubai and I work out of those cities. I was in Dubai and then lockdown happened, and I felt something very significant changed.

I embarked on this journey and I wanted to evoke real societal change, I wanted to try and make a change that was very poignant, and I felt that change needed to be made, but could be made because I felt that we owed it to all those people that have lost their lives, and those families have been torn apart to make a change, and if we couldn’t make it now, we never would.

Can you talk us through the inspiration behind ‘The Journey of Humanity’?

We talk a lot about how our planet is being destroyed, but what we don’t realize is how humanity is crumbling, and we need to concentrate on that as well. The two are both as important as each other. I wanted to shine a light on the state of humanity and how we might be able to improve, with love and empathy, treating everyone equally.
I put a call-out to the children of the world where I got all their artwork and pasted them into portals within my painting, and that was a beautiful thing because it encapsulated, a moment in history of what was in these children’s hearts and souls around the world, and it was a complete dichotomy of race, social background, financial background and ethnicity etc. Children from every walk of life, from orphaned refugee camps to the privileged in the Western world sent their artwork. And that became something so beautiful and so powerful, and that just kept inspiring me to keep going when I felt at many moments I couldn’t.

And with that, a simple message became clear, which was, if one man could spend 20 hours a day for 8 months creating this painting, which ended up being just under 18,000 square feet, imagine what 7.5 billion people could do together if we stop the nonsense, the discrimination, the hate, the judgment, the manipulation, the lies, and we united, imagine what we could do. I really focused everything I had, not only with the painting but with everything I did outside of the painting on trying to create a platform that could unite humanity and give us hope as a united force. 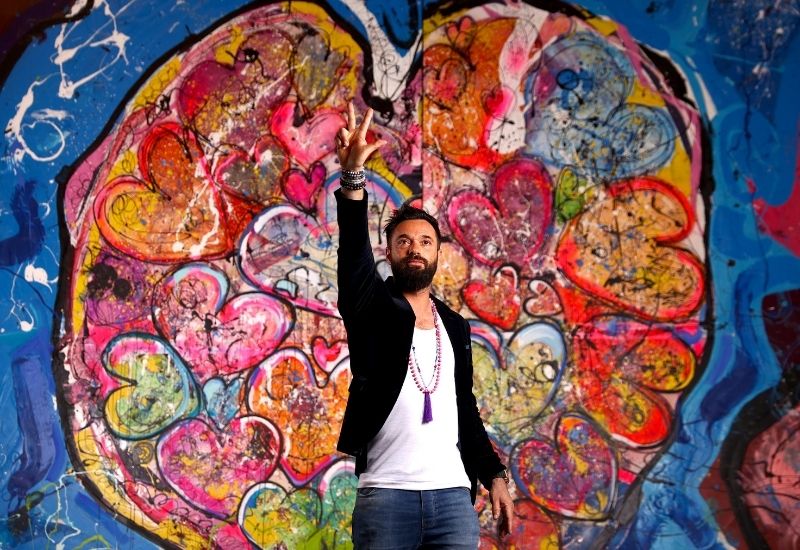 Did you expect the painting to be auctioned for such a high value, $62Million?

No, the original plan was to do six auctions around the world. Our target that we said to Dubai Cares when we approached them, we said we would hope to be able to raise $25 million for you, and they actually said, well, it would be amazing if you could raise $30 million. And so, we said okay, we’ll give it a shot! People thought we were crazy…how can you set yourself a target like that in a time like this?

So, we embarked on this journey and I created the painting, we had a tiny team of four people, Falguni Wheadon, Simrin Vaswani, Pyong Sumaria and Lori Moggy and they are the people that gave their time for free, they gave their heart and soul for a period in total of 15 months. But without them, we wouldn’t have achieved what we achieved.

We had this understanding that we wanted to be able to raise that money for Dubai Cares, for them to then distribute those funds to UNICEF, UNESCO and The Global Gift Foundation, who were three charities that we believed in. That was the goal.
The painting took seven months to create, but then it took another five months to cut it up, roll it, stretch it onto stretchers, catalogue each and every bit, number each and every bit, and then hang the final creation, my artwork and vision for my Painting, ‘The Journey of Humanity’, in the Atlantis the Palm ballroom.

So, if you imagine I painted for seven months, I then spent the next five months cutting it, stretching it, hanging it in Atlantis, and then we came to auction and we had a lot of interest, but we sort of said between ourselves, the team that is, Falguni Wheadon who was our project lead, Simrin Vaswani, Lori Moggy, and Pyong Sumaria, who was our official videographer and photographer. And between the team, we decided that if we had a bid over $30 million for the entire painting, which was the commitment we’ve made to Dubai Cares, we would then sell the painting as one, but we didn’t expect it would necessarily happen!

And then on the night of the auction, we had that bid of over $30 million, so we did the auction of the whole painting as one, and we actually were astounded. I was blown away. It was very emotional. It just made me feel very grateful to be honest, because the painting sold for $62 million. It was a beautiful auction with people bidding on the phones, on the floor, between each other, and it went to someone in the room, which was fantastic. But the nice thing is the guy that bought it, he bought it because he wanted the painting to remain as one. And that’s a beautiful thing.

You have clients the globe over. Which other projects have been ambitious to date?

I have a 25-year career as an artist, and I have a lot of buyers, and collectors around the world. That’s sort of the type of artist I am, and I’m lucky that I have an interest in a lot of different countries, which I feel really grateful for. I think that’s the whole point of being an artist really, to spread your work around the world and, and hope to engage in as many communities, and cultures as possible because then maybe you can make a difference as an artist.

I’m very fortunate to be in that position. There are a lot of big projects that I’ve done and there are a few more coming up. I’ve done commissions for some reasonably incredible people including Mr. Mandela, Virat Kohli, David Beckham, Roger Federer. I was commissioned for the painting celebrate the 25 years of the British Premier League, the painting to celebrate the anniversary of Wimbledon, the Lawn Tennis Association in England, a painting to celebrate the Grand Prix in Monaco for Prince Albert, a commission to celebrate the Hundred Greatest Living Muslims for Prince Charles. I did a beautiful project for Prince William at the Saatchi Gallery, where we raised a lot of money, and that’s what my work’s always been about and will continue to be about.

What would you say have been the milestones in your career?

Very recently in Dubai, I did two very special pieces specifically for his Highness Sheikh Mohammed bin Rashid Al Maktoum’s 100 Million Meal Campaign, and we managed to raise a huge amount of money from those two paintings, which is such great news because I think it’s a fantastic cause that can help a lot of children around the world.
But it’s still the case of fine, feed them today but what happens tomorrow? The reason why I got involved and felt that the project was really something quite superb was the fact that it’s linked to the UN’s World Food Program, and World Food Bank aiming to end world hunger by 2030, to completely eradicate hunger and malnutrition throughout the poorest communities of the world by 2030.

What do you see your next big project being?

My 18 Year Retrospective is currently on view at the Leila Heller Gallery in Al Serkal. It is the most stunning Gallery and I’m so happy to be there for people to see my work. Leila Heller has a beautiful soul and the Gallery has incredible energy. As far as things coming up in the future, I’ll be doing something for Tokyo for the Olympics and for Expo 2020. I’ll be continuing with my 18 Year Retrospective world tour, and I have a very interesting collection inside me that I think is going to further amplify my message from ‘The Journey of Humanity’, which is really to try and embrace every culture of the world, every community, to try and connect us as one humanity.