Refugee Team To Take Part In The Rio Olympics 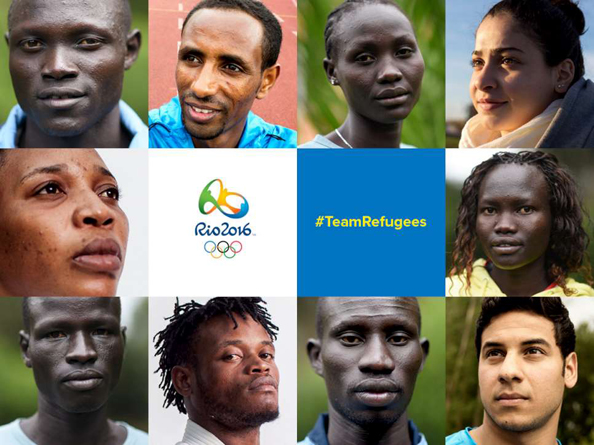 For the first time in the Olympic games history (1896), there will be a non-national team taking part in the tournament, a team made up entirely of talented refugees.

The International Olympic Committee announced that a selection of 10 refugees who will compete this August Olympics in Rio de Janeiro, forming the first-ever Refugee Olympic Athletes team.

The history-making team includes two Syrian swimmers, two judokas from the Democratic Republic of the Congo, a marathoner from Ethiopia and five middle-distance runners from South Sudan.

Meet the 10 team members in this heart-warming video:

Not only does the inclusion in the games allow some talented sports stars with ‘no home country’ the opportunity to achieve their dreams but it also helps draw attention to the refugee crisis. The aim of the organisers of the Olympic Games Rio 2016 is that the team will be a symbol of hope for refugees worldwide.

Sports stars are held up as heroes and idols and the stories behind the battle of each of these each of the 10 team members are incredibly inspiring. Here we share the stories of the three women who are part of #TeamRefugees:

When a boat carrying 20 other desperate passengers making their way to Greece from Damascus started to sink, Yusra Mardini jumped into the water with her sister, Sarah, and began pushing the boat towards their destination.

“There were people who didn’t know how to swim,” said Yusra, who represented Syria at the FINA World Swimming Championships in 2012. “It would have been shameful if the people on our boat had drowned. I wasn’t going to sit there and complain that I would drown.”

Now living in Germany, in September 2015 she started training with a club in Berlin, Wasserfreunde Spandau 04 before being picked to compete in the women’s 200-metre freestyle event.

“I want to represent all the refugees because I want to show everyone that, after the pain, after the storm, comes calm days,” she said. “I want to inspire them to do something good in their lives.”

During the fighting in the eastern Democratic Republic of the Congo Yolande Mabika was separated from her parents when she was a young child and was placed in a centre for displaced children. It was there she discovered judo.

“Judo never gave me money, but it gave me a strong heart,” she said. “I got separated from my family and used to cry a lot. I started with judo to have a better life.”

In 2013, Yolande got her first chance to compete at an international level – the World Judo Championship in Rio – yet, her coach confiscated her passport and limited her access to food. Fed up with years of abuse, Yolande fled the hotel and wandered the streets searching for help.

Now, as refugee in Brazil, she won a spot on the Refugee Olympic Athlete team. She said: “I hope my story will be an example for everybody, and perhaps my family will see me

After fleeing war in South Sudan when she was 10 years old, Rose discovered her talent during a school competition in the refugee camp in northern Kenya where she lives. Without any previous experience she came in second place and decided to take up training.

She said of her forthcoming race in Rio: “I will be representing my people there at Rio, and maybe if I succeed I can come back and conduct a race that can promote peace, and bring people together.”

Read: Queen Rania Shares Her Sentiments On The 5th anniversary Of The Syrian War

Anjelinahas has not seen her family since she was six years old when she was forced to flee her home in southern Sudan. Turning to sport to stay motivated through the “hunger” she endured, she was surprised when she was chosen to compete in the Olympics. She is hoping to win, of course, and use the money from the winnings to start a better life. “If you have money, then your life can change and you will not remain the way you have been,” she said. After hearing her parents are still alive she hopes to win and “build my father a better house.”

For more information about the Refugee Team heading to Rio visit, here.