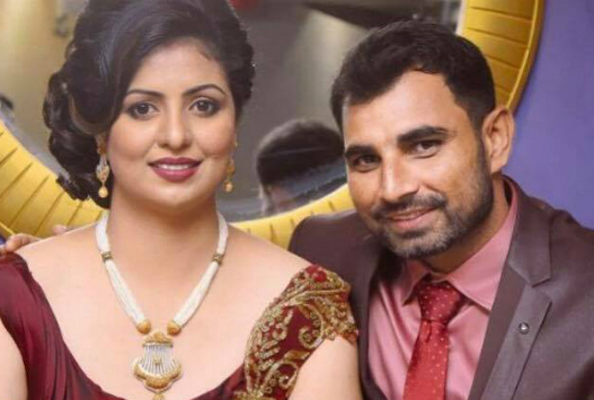 He was just proudly sharing a photo of his family – but Mohammed Shami ended up having to defend his wife against critics who slammed her “immodest” outfit.

The Indian cricketer posted an image of his wife and young child on Twitter and Facebook on Sunday with the caption “beautiful moments”.

However instead of festive wishes, the picture drew criticism from some fans, who told the pacer to “ensure that she wears the hijab and modest clothes”.

In the image, Shami’s wife, Hasin Jahan, is wearing a red sleeveless dress with her hair uncovered.

“Shame on you. As a Muslim, keep your wife in purdah [covered clothing]. Learn from others,” one user commented, according to a BBC report.

However Shami wasn’t going to let the trolls attack his family without fighting back.

“My child and my wife are my companions in life. I exactly know what to do and what not to do for them,” he wrote on his social media accounts.

“We all need to look inside to know how good we are.”

Shami wasn’t the only one to jump to his wife’s defence, with other users – including fellow cricketer Mohammad Kaif – backing him up.

Read:
Struggle To Play Sport In Your Hijab? Well, A Solution Is In The Making
She Wasn’t Allowed To Box In Her Hijab, But This Girl’s Rival Had Her Back

“There are much bigger issues in this country. Hope sense prevails.”

Dear Mrs Shami,
We have never met but I must say that you look splendid in your gown.
Regards to your proud husband.
With love,
Farhan.