Sheikha Al Jalila Gets A Unicorn (Well, Kind Of) 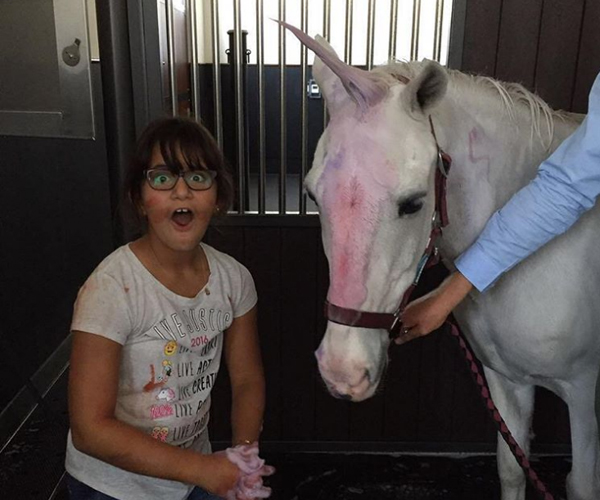 The daughter of Sheikh Mohammed gets creative in the stables…

Have you ever seen a child look so joyful?

Probably not – and that’s exactly what you’d expect when a 9-year-old comes face to face with a unicorn.

Not a real one, of course, but this pastel-tinted steed comes pretty close.

Read:
Dubai’s Royal Pilot Takes To The Skies On Her Maiden Passenger Flight
Sheikha Latifa: The Daredevil Royal Who’s Inspiring Us To Be More Adventurous

Sheikha Al Jalila made her own mythical creature recently, according to an Instagram posted by her mother, HRH Princess Haya Bint Al Hussein.

“Finger paints, shampoo, water, a white pony and a very creative Jalila gives you a unicorn!” the royal captioned the image.

The daughter of HH Sheikh Mohammed bin Rashid Al Maktoum, Vice President and Prime Minister of the UAE and Ruler of Dubai, is an avid horse-lover, and can often be seen riding in images shared by her parents.

In fact, the whole family are keen equestrians – Princess Haya was even the first woman to represent Jordan in international equestrian sport, and the only woman to win a medal in the Pan-Arab Equestrian Games.

And it looks like she’s passed on that love to both of her children, including 5-year-old Zayed:

HH Sheikh Mohammed has recently visited Africa, according to a range of travel snaps posted on his Instagram account.

While the ruler of Dubai has not yet released a statement about his time in the continent, or the purpose of his trip, he seems to have had quite the time.

The royal earlier this week supplied a plane to transport Dhs1 million of emergency aid to a cyclone-hit Madagascar, but it is not known what country he visited.

But we’re hoping some more travel pictures are released soon…