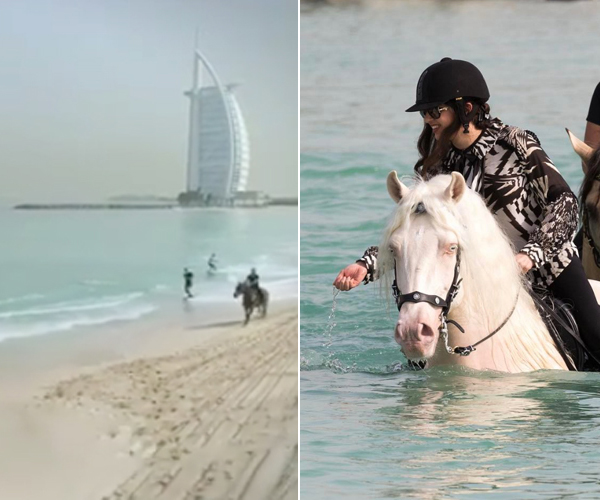 Wakeboarding while being propelled by a horse? Don’t try this at home, kids…

Whether it’s breezing through obstacle courses or jumping out of planes, Dubai’s royals are pros when it comes to adventure sports.

And a new video offers up yet another example of how adrenaline-thrilling the emirate’s Sheikhas like their activities.

Read:
This Beautiful Photo Shows The Special Bond Between Sheikha Al Jalila And Her Father
Sheikha Latifa: The Daredevil Royal Who’s Inspiring Us To Be More Adventurous

But this isn’t your average canter around the park…

The royals showcased their riding skills on Jumeirah Beach, as they joined a group who pulled along wakeboarders and surfers from Surf House Dubai.

It isn’t clear from the clip if the sisters actually rode the horses that pulled along with water-sports experts, but they can be seen riding their steeds through the waves.

And they couldn’t have picked a better spot to show off their horse surfing, with the Burj al Arab looming in the background.

The sisters were also joined by their cousin, Sheikh Latifa, daughter of HH Sheikha Fatima, as well as performers from horseriding stables Team Z7 and martial arts experts Team Nogueira Dubai, who expertly pulled off the stunts.

The video clips have amassed thousands of views on social media over the weekend, with many commending the royals for their talents.

Where do they get their skills from?