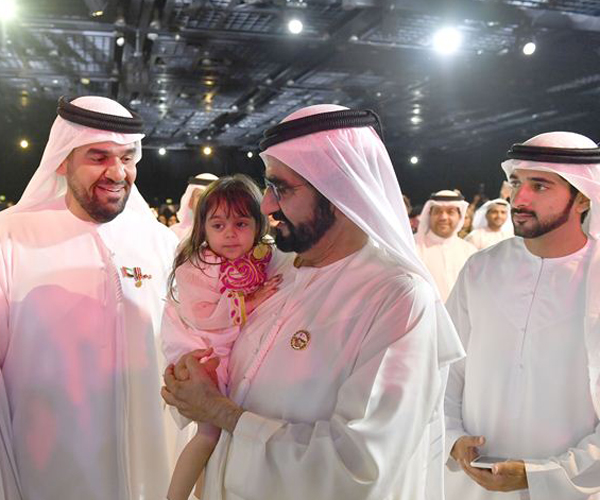 She won Dubai’s ruler over by imitating one of his speeches, but now she’s a star in her own right…

She’s only 6, but already Mahra Al Shehi has quite the following.

The Sharjah schoolgirl shot to fame after a video of her reciting one of HH Sheikh Mohammed bin Rashid Al Maktoum’s speeches went viral, with a retweet from none other than the Vice President of the UAE and Ruler of Dubai himself.

The royal even tracked down Al Shehi for a home visit, where the girl performed her speech for Sheikh Mohammed in person.

Read:
Sheikh Mohammed Calls For Increased Generosity To Those In Need Over Ramadan
Like Mother, Like Daughter: Queen Rania And Princess Salma Enjoy Some Bonding Time

And now, months later, another one of Al Shehi’s recitals has stolen the spotlight.

The schoolgirl performed a poem at last week’s Hathi Biladi (This is My Homeland) Operetta, which was held at Dubai World Trade Centre.

More than 500 students took part in the Ministry of Education-organised event, but it was Al Shehi who won a hug from Sheikh Mohammed afterwards.

The royal was pictured congratulating the 6-year-old on her performance, with Al Shehi revealing to her 117,000 Instagram followers it was “an honour for his hands to carry me for the second time”.

The girl also met the Crown Prince, and Chairman of the Executive Council, who attended the performance, and was pictured enjoying a one-on-one chat with the royal.

Sheikh Mohammed later said the operatta, which was performed by Emirati and Gulf vocalists, “reflected the loyalty to the UAE and the leadership, and emphasised the unity of the UAE people”.

Al Shehi, who’s a grade 1 student at the Sharjah Model School for Girls, is a regular charity volunteer with dreams of becoming a dental surgeon.