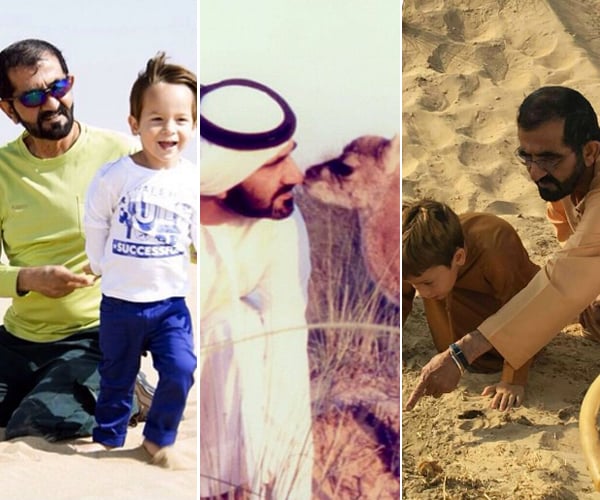 Well, Sheikh Mohammed bin Rashid Al Maktoum’s, Vice President and Prime Minister of the UAE and Ruler of Dubai’s, is on another level.

Across all of his accounts, Dubai’s much-loved royal has just clocked up a staggering total of 15 million followers.

Rather impressive when you consider that there are only 400 million users on the site.

There’s a reason why Sheikh Mohammed’s following is so substantial.

Whether he’s posting an inspirational quote, announcing a new project for Dubai, or even sharing a cute family photo, this social-media-savvy royal has something for everyone.

So, to celebrate his recent achievement, here are 15 of our favourite Sheikh Mohammed social media moments.

2. Hanging out with his children, Al Jalila and Zayed.

3. Quite possibly one of the best-timed, coolest photos ever on National Day 2016…

The heart of the UAE beats to the rhythm of its leaders, government and people; all united and invincible as one nation pic.twitter.com/YId2CVcbw7

4. That time Sheikh Mohammed wrote an incredible letter on tolerance.

What makes us proud is not the height of our buildings,but rather the openness and tolerance of our nation https://t.co/8rM9hsbwBZ

5. Sheikh Mohammed stands proudly next to one of city’s latest modern marvels – the Dubai Canal.

6. A young Sheikh Mohammed and his falcon.

9. On the UAE’s top priorities…

Our absolute priority is the benefit of our people and creating an environment for our citizens and their families to enjoy a decent life.

On Aug. 28th we celebrate the Emirati woman, our pride and our Partner in building the country #EmiratiWomansDay

11. The UAE is proud of their humanitarian efforts.

As a proudly humane nation, the UAE provides more aid as a % of its GDP than any nation. Tomorrow we celebrate World Humanitarian Day.

Dreams begin with ideas, a word, an image or even a postage stamp. As generations work to fulfill our dreams, we develop concrete realities

13. Even with his busy schedule, even Sheikh Mohammed finds time to enjoy the cooler weather.

Dreams begin with ideas, a word, an image or even a postage stamp. As generations work to fulfill our dreams, we develop concrete realities

14. The Dubai Ruler meets with Emirati schoolgirl Mahra Al Shehi after a video of her rehearsing a speech for school assembly that included a Sheikh Mohammed line hit the internet.

15. Sharing a meal and a moment with some of the UAE’s armed forces.

1. Sheikh Mohammed fills his personal plane and sends it (with the help of HRH Princess Haya) to deliver aid to Haiti.

2. Sharing a father-son moment with Zayed over a Shake Shack.

3. Teaching his son the ways of the desert. Zayed’s a brave kid!

4. That time a young Emirati boy recited a poem for Sheikh Mohammed.