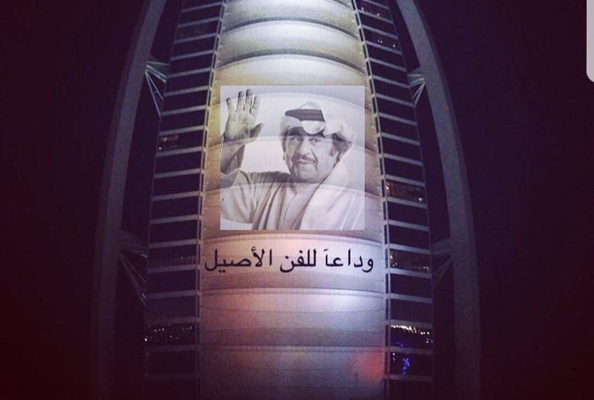 “We say goodbye to a source of laughter and happiness,” said Dubai’s ruler in dedication to Kuwaiti legend Abdulhussain Abdulredha.

The statuesque Burj Al Arab lit up last night in honour of an acting legend from the region.

A portrait of Abdulhussain Abdulredha was projected on to the seven-star hotel following the Kuwaiti star’s death last week at the age of 78.

The comedy icon, beloved across the Middle East for his political and social satire, passed away in London, with a funeral held in his homeland on Wednesday.

Thousands of mourners gathered in Kuwait as the late thespian was laid to rest, while tributes were paid from leaders around the GCC.

HH Sheikh Mohammed bin Rashid Al Maktoum, ruler of Dubai and vice president and prime minister of the UAE, was among them, writing a touching dedication to Abdulredha on social media.

“Kuwait and the people of the Gulf today said goodbye to artist Abdulhussain Abdelredha,” the royal said.

“We say goodbye to a source of laughter and happiness in the Gulf. Every GCC citizen has spent beautiful moments with you.

“May Allah keep you happy in your final abode.”

Read:
Some Of The British Royal Family’s Most Famous Jewels Have A Middle Eastern Link
Proud Queen Rania And King Abdullah Celebrate Their Son’s British Graduation

The esteemed actor, whose works include Seif al-Arab and Bye Bye London, provided decades of mirth for viewers across his wide-spanning career.

His final role was in Selfie 3, which screened on TVs earlier this year.